Max goes to camp, and misses some major excitement 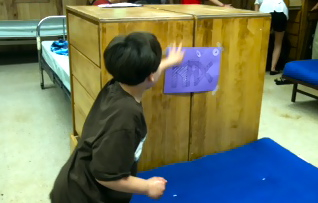 This afternoon, we dropped Max off at camp, where he'll be for a week. He seemed perfectly calm. Me, not so much.

Right before we left, I heard something scratching inside the living room wall. Like some sort of creature. Unnerving, but I was too distracted by Max's departure to give it much thought.

The camp could not have been more welcoming. Right off, his counselor bounded out to greet us. Kirsten's from Scotland (a lot of counselors come from abroad, including one who reads this blog) and seemed lovely and competent. She asked all sorts of questions about Max as I unpacked his clothes and made up his bed (purple bedding, of course), and didn't blink twice when I said that he likes all pictures he draws to have "Max eats spaghetti sauce" written across the top.

I had been a little concerned that his assigned bed was smack in the center of the bunk, since he tends to like corner spots. But Max was more distracted by the fact that another kid had Thomas the Tank bedding. He attempted to rip off the purple "Max" sign they had posted above his bed and put it above that kid's bed, thinking perhaps nobody would notice the bed switch. Smartypants. 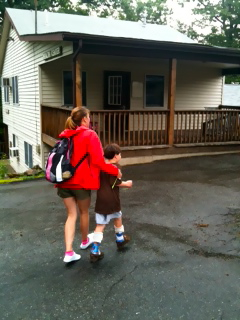 Kirsten and Max took off for a walk. I met with one of the camp nurses and discussed putting on the day braces and his new, nifty purple night one (more on that this week). Sabrina volunteered to show how to put on the purple brace, because she's been dying to try it. Then I gave the nurse the scoop on the anti-seizure med Max takes twice daily, Trileptal. She asked what Max looks like when he has a seizure, and talking about it brought back the trauma of the two he's had in the last few years. So of course, I was even more jittery about leaving him.

Next, I spoke with the camp cook. They did serve spaghetti with sauce as well as chocolate ice-cream, as I'd been promised, but no oatmeal (Max breakfast staple) or applesauce (Max snack staple). So off we went to the supermarket to pick up some and, bonus, I found blueberry applesauce that had a purple tint. 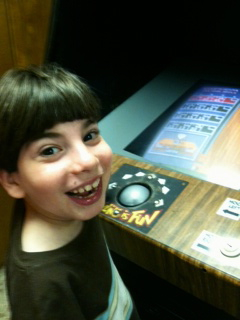 I left Max playing a video bowling game. "Bye, Max," I said. He gave me a kiss and went right back to the game. He seemed perfectly content. I asked/begged Kirsten to email me photos, and then we were off.

And I didn't even call the camp.

For a whole two hours.

Nobody picked up at the main number, so I left a message on the camp director's cell. No response. Eep. Meanwhile, we took Sabrina out to a nice Japanese restaurant, the kind of place we don't go with Max because they do not take kindly to BYO spaghetti. Then Sabrina wanted to rent that Justin Bieber movie Never Say Never from a Redbox, even though she's insisted she doesn't really like him since the day a couple of weeks ago when she casually asked Dave about getting the video.

When we walked into the house, a few photos were knocked over from a table and a lampshade was askew. For some reason, I thought it was a bat. I made Dave walk all around the house. Nothing. I left a message with the exterminator.

Then we settled down to watch Justin Bieber. I have to admit, I wasn't bored: The kid has charm and talent. Midway through I started wondering whether Max could be a rock star, that mind game I play, but no, he hates crowds. Although he does have the hair. Lightbulb! Max would look awesome with that Justin Bieber cut. I assume it's doable with a whole lot of gel.

As the three of us were sprawled out on the couch glued to the TV, a SQUIRREL MEANDERED INTO THE LIVING ROOM.

Like he wasn't sure he'd wanted to join us for TV night but had finally decided to come.

The squirrel scooted back to the kitchen. Dave took off after him. Sabrina jumped onto my lap and started wailing.

"Don't cry, honey," I told her. "He likes Justin Bieber! He wanted to come watch him!" Then to Dave: "OPEN THE BACK DOOR NOOOOOOOOOOW!"

A few seconds later, the squirrel did a lap through the living room, at which point I again screeched, "AAAAAAAAAAAAARGH!" or something like that.

"He went out!" Dave reported from the kitchen. Then he walked in with our fruit bowl, which had been filled with green apples. The squirrel had chewed through most of them. Lovely.

"You know why the squirrel came in here?" Dave said.

"Because he heard Justin Beaver on TV and he wanted to come tell us he was a squirrel, not a beaver!" Dave told her, and Sabrina and I both cracked up.

We have had some weird creature experiences in the last year—the dead birds, Maxsutawney Phil, the squirrel in the attic I got Dave for our 10th wedding anniversary—but I don't think anything beats a squirrel in your LIVING ROOM. As Justin Bieber croons "Baby, baby, baby, ohh" in the background.

I made Dave look behind all the furniture for poop and/or another squirrel, just in case Squirrel #1 had a traveling companion. Nada. Then Dave drove off to deliver Max's iPad to his wonderful school speech therapist, who is helping us program some new stuff into it, and I took Sabrina for ice-cream. She was not amused when I asked if she wanted squirrel ice-cream.

My cell phone rang as we downed our cones. It was a counselor at camp calling to ask whether Max had two night braces. Nope, I said, just the one for his right foot. Max was doing great: He'd participated in activities all day, and was getting ready to go to sleep.

I know it's crazy but I felt a little bad that Max missed the squirrel visit. It would have made him laugh hysterically. At the very least, the squirrel distracted me from worrying about Max.

Now I am ensconced in bed and worried about squirrels taking over the house.
Ellen Seidman at 10:30 PM