Kids with special needs: It's not me, Mom, it's YOU! 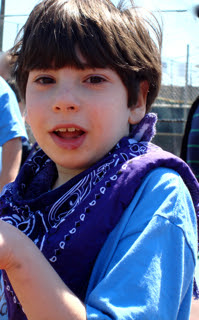 The other morning, Max and I were lazing out in bed, neither one of us wanting to start the day. He pointed to something out the window and said a word.

I had no idea what he was saying. It sounded like "air-ay."

His iPad was downstairs, and I wasn't getting up to get it. (See "lazing out" above.)

I took a guess: "Are you talking about Caleb?" I asked (his bff). He pronounces Caleb in all sorts of ways; the "c" and the "b" are difficult for him to say.

"Sweetie, I'm not understanding you," I said.

Max leaned over close to my face, looked into my eyes and said, "AIR-AY."

I still wasn't getting it.

This time, he leaned over to my ear and practically shouted "AIR-AY! AIRRRR-AYYYYY!"

Max didn't think I wasn't getting what he was saying; he thought I was having trouble hearing him.

It took me a few more tries to figure out the word was "airplane" and that he was telling me that he'd like to take a plane trip somewhere, and could I please make that happen? "Yes, Max, we'll go on a plane trip this year," I said.

"Yes, we'll eat spaghetti on the plane," I promised.

Obviously, I want Max to be able to communicate clearly with me and others. The iPad's been a game changer (and very helpful for exchanging words with hearing-impaired friends); his speech should grow more intelligible over time. But I also hope that Max always takes this approach to life: