Helping kids with special needs fit in: I did not buy the purple Crocs 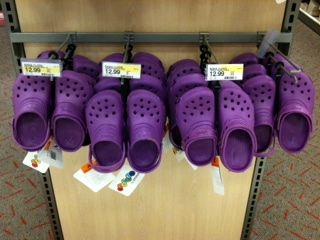 I stopped in my tracks in Target. "Whoa!" I said, though I was by myself. Right there in front of me, hanging from a display: a cluster of purple Crocs. Gloriously purple Crocs. Max nirvana (yep, he is still obsessed with purple).

I stooped down, looked for his size, dropped the pair in my cart, started to push it away.

Bright purple crocs on an 8-year-old boy with special needs: Not so cool. Maybe other 8-year-olds could get away with them, I don't know. Max is plenty cute, and he'd look extra cute with them on. But cuteness does not win you boy friends when you are 8 years old. Cuteness alienates you from other children, especially when you have certain traits that already make you seem younger than you are.

I've been very conscientious lately about helping Max look more his age. We just got him a new haircut, some homeboy clothes for spring, and custom purple bandanas to help with the drool situation. I mean, the bandanas aren't inconspicuous but they sure beat the terrycloth bibs.

I just didn't think those purple crocs would do much for his image—perhaps it's time to call in the What Not To Wear people. Sure, in theory, Max could trek around in purple crocs only at home, but that would never happen. He would want to wear them 24/7. He'd want to sleep in them. No, if I'd bought him the purple crocs, they would have been on his feet from now until the first frost, and probably beyond. I could practically hear the wails and screeches that would result when I made him take off the crocs to leave the house.

I am not the least bit ashamed of Max. He amazes me every single day, minute, second. And as you know, I am all for purple paraphernalia. But I want to help him help himself, even if he isn't yet aware of the things that make him stand out from other kids.

I put the purple Crocs back on the hook. Stood there for another couple of minutes, gazing at them. I felt a twinge of regret—they would make Max really happy.