When do you stop comparing your kid to other kids? 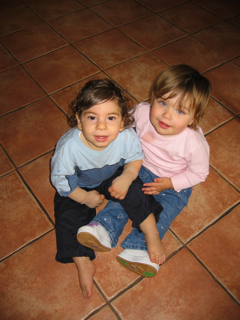 Max at 22 months, with a friend
"Marley will be a year next week," Crystal recently wrote to me. Her little girl has Rhizomelic Chondrodysplasia Punctata (RDCP), and has been through multiple surgeries. Crystal gave me permission to share part of her letter, because I thought a lot of you would relate:

"It seems like it's getting harder and harder to not compare her to other kids her age. I guess when she was younger it was easier to not compare because there is such a vast difference between what is developmentally normal and what might be just a little delayed. Not crawling at 7 months is not nearly the same as not crawling.... She is making huge progress and within her diagnosis she is doing amazing. But yet that ugly comparison monster still raises its head from time to time. There seems to be such a fine line between just being grateful that she is as capable as she is and yet still wanting her to meet those 'typical' benchmarks.... So when did the comparing stop, or at least get less pronounced?"

Then I got an e-mail from another mom who had just been with her twin boys, both of whom have cerebral palsy, at an indoor playground. They're two years old. One is able to walk, the other is still crawling. "I got very emotional as I watched all of these kids, some of whom were much younger than my boys, running around the playground, climbing up the stairs and going down the slides all by themselves," she wrote. "I found myself in a state of sadness the rest of the week and I am having trouble getting out of it."

The comparing thing can be pure torture. When Max was an infant, and Dave and I were freaked out by his muscle tightness and a possible diagnosis of cerebral palsy, we'd often check out other kids' hands. "See? That baby's hands aren't open all the way," Dave would say, and I'd feel a little reassured, a little more hopeful. If that typical baby's hands were slightly fisted, maybe it was OK that Max's were, too. As Max got older, the comparing got worse. I'd dread going to playgrounds, parks, zoos or anyplace where there were a lot of little kids. I still remember the spate of first birthday parties and choking back tears as I watched kids crawling, sticking things into their mouth, babbling and doing their baby things as Max sat in my lap, content yet immobile and silent.

Not one other mom I knew back then had a kid with special needs.

The comparing was at its most intense up until Max was three. That was partly because those years are such a tremendous period of development for kids, and the gap between them and Max kept widening and widening. I also lacked acceptance that Max was on a different timeline than other kids were. "The most important thing is that he keeps progressing," our neurologist would tell us. I'd hear the words, but my heart didn't. Because back then, I felt the same as Crystal: progress in whatever increments was important, though I yearned for him to keep up with other kids.

Max hadn't yet grown into his personality. He was always a happy-bubbly kid, but in the early years he was clingy and not yet able to communicate his wants or needs. He was unformed, which meant that it was easy to keep imagining—so desperately imagining—that maybe he'd be like all those other kids at the party.

There wasn't a day or time period when the comparing died down. Obviously, one thing that helped is Max's progress, which both thrilled and reassured us. Still, I had to find ways to deal with my anxieties about the delays. So I'd bail on birthday parties if I wasn't up to them, and came up with things that helped me take more pride in Max, like doing photo shoots with him or asking therapists to make lists of Max's gains and improvements. It may seem horrible that I had to find ways to take pride in my child, but they helped to quell the raging disappointment and anxiety.

As Max got older, I developed, too. If we were at a playground, instead of despairing that he wasn't able to climb the monkey bars or go up the slide, I'd think, "Damn if he isn't going to enjoy himself too!" and I'd help him up or down or any which way around. Focusing on helping your child to the best of abilities is good for both of you.

Making playdates with other kids who have special needs has been comforting to me, too. When Max was little-little, I was lax about that (and in denial). I'd only hang with my friends on weekends and their typically-developing kids. Hel-lo, comparing. Pairing Max up with kids like him was fun for him and cathartic for me—I could trade notes with other parents who really got what I was going through.

The passage of time, Max's progress, helping me help myself: they all enabled me to quit comparing Max to other kids.

Max is who he is—not who he isn't.

At times, I still get pangs when he hangs out with other kids, especially if one's been mean to him, but not very often. Max has come a long way and I have, too.