Siblings with disabilities: Her brother's keeper 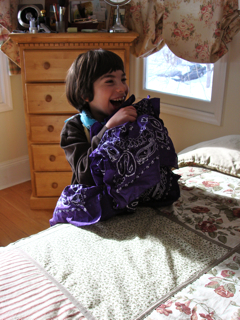 I had a roller coaster kind of Saturday, the kind of day where you're both happy and despondent about your child.

Saturday afternoon, Max and I took a bunch of purple bandanas (there they are above) and two yards of purple terrycloth (thanks, fabric.com!) over to a local sewing genius who's made curtains for me. Jaye's going to whip up some absorbent bandanas Max can wear around his neck, to catch the drool, which doesn't seem to be easing up. A few weeks ago AZ—a young woman with cp who blogs over at Life and Times Of A Teenager With Disabilities—and I were on Facebook, and she messaged me to say "No offense, but Max is too old for bibs." She'd seen one in a recent photo. I knew she was right. Max is beyond psyched to try the ur-ul bandanas. When I pulled them out of the mailer they'd arrived in, he made that happy squeal I can never get enough of.

Saturday night, the gym where Sabrina takes gymnastics had a parents night out; you drop the kids off for a few hours. Sabrina's been sick but she begged to go, and we gave in. Dave and I had dinner, then did some shopping. When we picked the kids up, Max was running around, laughing his head off. The girls in charge said they'd both had a great time.

Cut to bedtime; I'm lying down with Sabrina in her bed, because she was complaining her tummy hurt.

Sabrina: "We played games and ate pizza and jumped on the trampoline and I made new friends!"

Sabrina: "He was friends with ALL the kids!"

Sabrina: "He was pretending to be a monster and scare the kids and they were all running away from him."

Me: "So they liked that?" Sometimes, Max does the monster thing when he's around new kids, and they either don't like it or actually get scared if they're young. It is not his most endearing habit.

Sabrina: "Some kids were making fun of him."

Sabrina: "ALL the kids."

This is where extrapolating information from a five-year-old gets really frustrating, and this is also where you start questioning whether you should be pressing your child for this sort of information. But I couldn't stop.

Me: "Sabrina, really, what happened?"

Sabrina: "There were kids making fun of him."

Me: "What were the kids saying?"

Sabrina: "They said he doesn't look like other kids!"

Me: "What were they talking about?"

Sabrina: "They said he's a droolie."

Me: "Yes, sometimes Max drools, it's something he does."

Sabrina: "And they said he eats baby food too!"

Sabrina: "I telled the girl!"

Me: "That was good. You can also tell the kids your brother is a great kid!"

I really wasn't sure what she should say to kids who tease. And I was getting distressed at the thought of kids making fun of Max, but kept my tone cheerful and carried on.

Me: "Max does some things kids his age don't do, but he also does a lot of the same stuff they do! Like he loves to play. And ride a bike. And eat chocolate ice-cream!

Sabrina: "And he likes to laugh! And play with trucks! And he can roll on the floor at gym!"

Sabrina: "I don't want to talk about this anymore."

I knew she was processing it all. She's trying to understand her brother and how he fits in, and how she fits in when other kids say things about him. At least Max doesn't notice, for now.

I'm still trying to figure things out, too. I hope I said the right words to Sabrina, and that I didn't unnerve her by questioning her. I ache for her to stick up for him. And I so want other kids to treat him like one of them. It's painful to think of him being teased.

For years I've heard about Sibshops, a group that runs workshops for siblings of kids with special needs. It just so happens that this week, a reader emailed me to say she is working on opening up one not too far away from where we live. Sounds like something that could be great for Sabrina.

Meanwhile, I think I could use a workshop for coping with teasing...or some advice from parents who have dealt with this.
Ellen Seidman at 9:30 PM