Mommy crap that erodes my brain 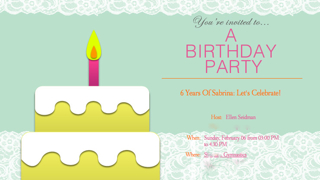 We got an invite the other day for a birthday party for a kid in Sabrina's class. February 6, at 1:00 at a local gym. Hmm. Why was the date so familiar? Oh. Because it was the same day as Sabrina's party. At the same gym. At 3:00. Organized Mom had gotten the invite out earlier than me.

I called the gym. The woman I spoke with said she'd change up the routines "slightly." That didn't sound so great. "Can I speak with the manager?" I asked. "I am the manager," she said. We spoke for another five minutes and she finally agreed that once she knew which college kids were scheduled to run the parties, she'd talk with them.

I can't believe I'm wasting brain power thinking about this stuff, but I am because I'm kind of stumped. And because Sabrina's been talking about her birthday party for about six months now. We spend a lot of time doing special stuff for Max, so I want this party for her to feel really special.

Ideas for what to serve? Please share and I'll present them to boss lady (aka Sabrina).
Ellen Seidman at 10:19 AM