He's on the charts, and I don't care 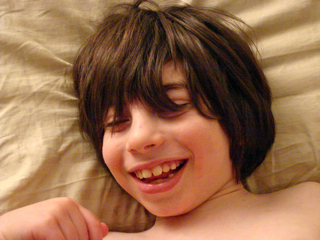 For the last year, I've been trying to fatten Max up. OK, not make him a porker or anything; it's actually good for a kid with cerebral palsy to be light on his feet. And because I still have to pick him up on occasion—to help him up stairs, or to change him—it's a good thing for me, too. Max still has the pinchable cheeks he's had since he was a baby, but he'd gotten so scrawny that I'd cringe at the sight of his ribs poking out when I'd give him a bath. The doctor wasn't concerned, but still.

Evaporated milk in his cereal, olive oil on his spaghetti and an indecent amount of chocolate ice-cream seem to have helped; Max has been looking more filled out. We went for his annual appointment recently. Max weighs in at 45 pounds—a nine-pound gain from last year.

"He's on the charts again!" the doctor said to me.

"What?" I said, distracted by my excitement over the weight gain.

"His weight had fallen off the charts for the last few years, but now he's back on—he's in the fifth percentile," the doc told me.

In all honesty, I have little interest in any chart that compares Max to other kids. It's a defense muscle I've built up over the years, and it's pretty strong now. Max is healthy in his own right; that's all that matters to me. I don't really care how he ranks.

Although I do wonder whether his crazy mop of hair accounts for any of the weight gain.
Ellen Seidman at 9:50 PM