It's not a special needs thang—it's a BRAT thang 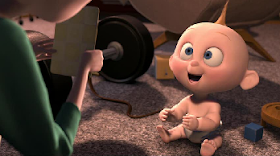 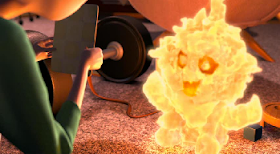 I have a tendency to think that when Max acts "off" in some way, it somehow relates to the brain damage. Like last night. Max had been sitting at the kitchen table watching YouTube clips from the movie Cars on his iPad (we still haven't gotten rid of YouTube, what can I say, I'm soft). Bedtime had arrived; Dave was already upstairs, reading to Sabrina.

"NOOOOOO," Max repeated. "I-AAAAH!" (His word for iPad.) At which point I took away the I-AAAAH and placed it out of his reach. At which point Max started crying-screeching—and did not stop for an hour. Seriously. Even after I dragged him upstairs, put him in his pajamas as he kicked and screamed, tried to get him to lie down. He charged around our second floor, wailing and saying "I-AAAAH! I-AAAAH!"

I kept picturing that scene from The Incredibles when normally sweet-tempered Jack-Jack turns into this fiery Beelzebub of a baby.

Nothing Dave said or did helped, either. We both started wondering if Max was feeling OK or whether somehow, the already-wacky wiring in his head had been disturbed—seizure activity? What?—and unhinged him. He fell asleep only after I lay down next to him in our bed (like I said, I am SOFT).

Cut to morning: Max wakes up with the most beatific smile on his face. Nothing wrong with him. Truth is, I realize, the night before he'd been acting like any other misbehaving little boy, mad because he hadn't gotten his way. Totally typical.

And I have got to quit viewing things through special-needs glasses.
Do you know what I mean?
Ellen Seidman at 12:25 AM