The trouble with public schools 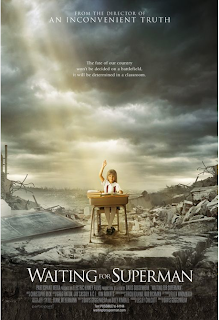 Dropout factories: Public schools in which about 40 percent of students drop out.

The Lemon Dance (also known as Pass the Trash and The Turkey Trot): Nicknames for the annual ritual around the country in which schools pass off bad teachers—protected by tenure—to other schools.

Lottery: The completely random method by which children's educational fates are decided every year.

These are just some of the terms I picked up from Waiting For "Superman," the big-buzz documentary that examines public education in America. And, boy, was it an education. The movie paints a bleak picture of substandard schools, inferior teachers and bureaucratic insanity. The title of the movie comes from something Geoffrey Canada, a social activist and educator, reveals early on: As a kid growing up in New York's South Bronx, he kept waiting for Superman to rescue him.

The film was directed by Davis Guggenheim, the genius behind An Inconvenient Truth. It centers around five kids and their parents, who have entered a lottery for a charter school. Four of them live in impoverished urban areas. I expected to see parents who cared, and I did, but was especially touched by how even young children understood that a good education is their ticket to a better life. One fifth-grader in LA, Daisy, already knew which college she wanted to go to, and had contacted them.

Want to know the grim statistics? This movie's got them, galore. Among 30 developed countries, the US ranks 25th in math, and 21st in science. The rays of hope in this film come from the innovators profiled. There's Geoffrey Canada, the man behind the highly successful The Harlem Children's Zone, who tells it like it is ("You can get tenure if you can breathe for two years."). I silently cheered Michelle Rhee, the public schools chancellor of the District of Columbia, who fired more than 200 crappy teachers (and who, sadly, resigned last week). And I wanted to meet Mrs. Burk, the rapping math teacher. Heck, I wanted to take her class.

I saw the movie with a friend; K12, a company specializing in online education for grades K to 12 and a proponent of accessible education, paid for our tickets. My friend and I both walked out of the theater distraught about the state of our schools. "How strong the country is 20 years from now will largely be driven by this issue," Bill Gates says in the movie.

Max is in private school, for now. I've been thinking about the potential of an inclusive class, but he's doing so well, it doesn't seem like the right time to switch. Besides, after our state had drastic school budget cuts, they replaced all the aides with hourly-paid ones, and there have been concerns about quality.

In general, the public schools where we live are considered good. Not great, but good. I'm realizing we're lucky—lucky, compared to what the families in the school have to contend with.

How are the schools in your area?
Ellen Seidman at 12:15 AM