What makes me lose it: the screeching 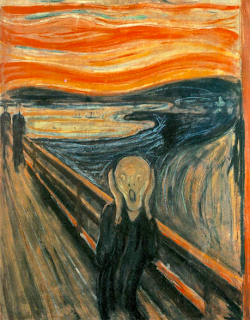 Max is a pretty happy kid, as you might glean from his ever-present smile. But lately, he has been screeching when he gets upset. And I mean loud, high-pitched, ear-splitting screeches that can go on and on for a stretch of 10 to 15 minutes.

The screeching isn't just unnerving, it makes me upset.

It shoots right through my body, tensing up my neck and shoulders and making my heart beat faster and my head throb.

It leaves me freaked for a while after it ends, too.

At its most intense, the screeching makes ME want to screech right back at Max. And I recently did in the car. I lost it.

"MAX, STOP YELLING!!!" I yelled, after Max had been screeching for 10 minutes straight, over what, I can't recall.

Dave, who hardy ever gets mad, glared at me. "Go blog about how you yelled at Max," he said. Meaning: That was a really crappy thing to do and your punishment is everyone should know about it and maybe tar and feathers would also be appropriate.

And so here I am. Not because I am "outing" myself, but because I need to vent. Max's screeching is something I am having a really, really hard time handling.

It happened a few times this past weekend. First, we were waiting in a cavernous apartment lobby for friends, and Max wanted to wheel around one of those luggage carts. The doorman said no. SCREECH SCREECH SCREECH SCREEECH, echoing off the walls. Torture for all of us. Dave finally took Max outside.

Then we went to visit The Bronx Zoo. Max was most charmed by a monorail ride through "Asia" (spotted: a tiger, elephants, rhinos, monkeys, ponies, and lots more) and a tram ride that shuttled guests between parking lots. We were really psyched when Max ventured inside JungleWorld, as he usually can't stand indoor exhibitions and this one was a great one complete with gibbons, otters, tree kangaroos, tremendous turtles, waterfalls and other natural wonders. Then we went to the Congo Gorilla Forest. The viewing room was large and echo-y and Max started screeching. I tried distraction; at one point, there were two little gorilla brothers fighting and I said "Look! Max and Sabrina!" The ape siblings caught his attention for all of 10 seconds before the screeching began again. We booked out of there.

A lot of moms have things that get to them. A few months ago, the awesome Jean at Stimeyland wrote about her son's habit of snorting. Her words rang true: "It is maybe the worst thing I have ever heard. It actually causes me some pretty intense physical discomfort. I feel it all across my shoulders and down through my chest." Catherine at Her Bad Mother has raged against her little girl's whining. Obviously, I am not alone in being driven nuts by a child's grating habit. I just don't know what to do.

Wait, it gets worst. Sabrina has started screaming when she's upset. She sometimes does stuff Max does, and this is her latest charming copycat behavior. She doesn't scream words, just lets out a big "AAAAAAAAAAAH!" She's doing it for attention; Max is doing it because it's become his go-to behavior when he's out of his comfort zone. Max doesn't screech at school. He doesn't do this with his therapists. He doesn't do this when he's with friends. He does it only with Dave and me when he is wigged out or not getting his way.

Calmly repeating "Max, please don't yell" doesn't work (and, in fact, makes him screech louder). Trying to get him to communicate his feelings by iPad in the heat of the moment most definitely doesn't work. Someone I know said that we should learn to ignore it; if we don't respond to the behavior, Max will realize he's not getting a reaction and quit. But ignoring it just isn't realistic in public spaces. I'm guessing another possibility is that we need to teach him to replace this behavior with another; I'm just not sure what.

As the saying goes, ARRRRRRRRRRRGH.
Ellen Seidman at 11:25 PM