Team Hoyt: Am I the last person on the planet to hear about them?! 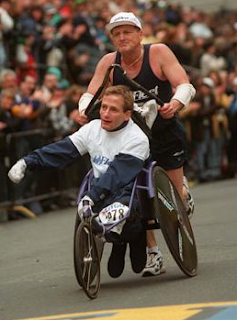 Tonight, I sat next to a neighbor, Barnes, on the train home from work, and he mentioned Team Hoyt, a father and son from Massachusetts. "My friend is doing her first triathlon, and someone told her that anytime she hit a wall she should check out videos about those two," he said. "They're amazing." I've been lying on our bed watching the YouTube videos since I put the kids to bed.

Rick Hoyt has spastic quad cerebral palsy. Three decades ago, when he was a teen, he told his dad, Dick, that he wanted to participate in a charity run for a kid paralyzed in a lacrosse game. They did the run together, Dick pushing his son in a wheelchair. One thousand-plus races later, these two are still running—marathons, duathlons, triathlons. Rick is 47; Dick is going to be 70 next year.

"Show Dave the videos!" Barnes said, laughing. "He needs to get going!" Barnes has the most dry sense of humor and let me just say, I appreciate people who can joke like this instead of tap-dancing around the fact that Max has cp.

Here's a Today Show segment about The Hoyts:


Anyone with a pulse would get worked up watching this. But when you have a kid with cp, you could pretty much bawl all over your bedspread, which I did. Especially when the interviewer read a fan e-mail out loud and said to Dick, "You're more than a father, you're a hero to so many," and Rick turned his head and smiled at his father so adoringly (minute 5:25).

Now, of course, I'm feeling like I need to do more, more, more for Max.

But I'm going to leave the triathlons to him.
Ellen Seidman at 9:55 PM