A special sibling connection...and a chance to win My Baby Rides The Short Bus 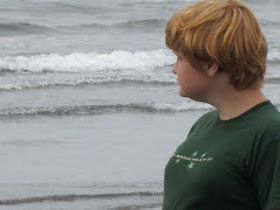 This is a guest post by Yantra Bertelli, co-editor of My Baby Rides the Short Bus, a quirky anthology of essays by parents of children with disabilities. I don't know about you guys, but until I had Max, I'd never even realized that kids with special needs ride a different bus than other kids. Then, when Max was three and headed off to school for the first time, the short bus showed up at our home. Now we're card-carrying members of the Short Bus Club—and I related to so much in this book. Read Yantra's moving post, then find out how you can win a copy of it.

My fourteen-year-old daughter pushes on her brother’s cheeks. He is taking big gulps of air, pursing his lips together and anxiously waiting for her to apply pressure on both sides at the same time. She pushes, air rushes past his lips and he smiles a wide do-it-again grin. They play their game again and again till one of them moves away in silence, maybe throwing in one of their two-step handshakes she taught him over the last year. Momentarily, two of my four kids actually seem to “get” each other. Sure, there are complaints and power struggles, but those moments are particularly one-sided, and this interaction staves off the broader picture for a few seconds. I decide to enjoy it.

What is less obvious about this moment is that my son is fifteen months older than my daughter, and the handshakes and cheek popping are his and his sister’s ways of communicating with one another. He is deaf, has autism, and a few other problematic neurological issues that would take me a while to list and explain. Though we usually sign lines of complete thought with him, he uses less than ten signs in a given day to make requests concerning his basic needs.

He appreciates following his own schedule. He will lash out at times when the individuals around him cannot help him cope with his feelings or are unable to comprehend a question or problem he is having. He has never told us that he was happy, sad, or angry without being prompted to do so. Additionally, the kids are stepsiblings, he did not share the first six years of his life with her and she did not share her first five with him. I know she can remember the early years when she was the big sister and not stuck in the middle. I do not know what he remembers.

The kids arrived at their exchanges on their own. I did not model the interaction for them or prod one or both of the kids to look into each other’s eyes and hold still. They figured it out, both kids had the desire and patience required to follow through in a multiple step interaction. It is true that my daughter often initiates their interactions, unless he wants water or food. She is in his face and almost too overwhelming at times for my tastes. She does not let him off the hook easily, though will back away if he starts getting agitated. She pushes him to give her something—some strand of interaction that she can work into play. Yet, I have also witnessed him puffing up his cheeks as a response to seeing her. Play brings her brother out of his in-the-moment need enough to long for interaction.

As they grow into adulthood, my typically developing children will ultimately initiate whatever relationship any of them have with my son. I have considered attempting to instill a sense of obligation in them so they will help him out if my partner and I cannot. I have often believed obligation could be an opportunity, a building block they could construct a relationship on. I want to trust in their desire to care for their brother out of love and in this line of thinking obligation would be the roots of this love. Unfortunately obligation can lead to resentment. Obligation is one-sided. Obligation can interrupt the delicate back-and-forth of relationships. In truth he is part of our family and in many ways obligation is appropriate, but I worry over the back-and-forth. In typical sibling relationships the expectation that you will fill your parents shoes one day with your brother or sister doesn’t enter your consciousness when you’re a kid. When your fifteen-year-old brother needs to hold your mother’s hand when he crosses a street, believe me, the future possibilities churn in the back of your mind.

One of my daughter and son’s handshakes starts high above his head. He reaches up, left arm angled, slaps her hand above his head, after making the half circle in the air he catches her hand at his lowest point for another slap, then he lets his hand fall to his thigh. Then they share a single knuckle tap, fists closed, a part that he often tries to lead with. Each time their hands connect, his eyes briefly find hers and they smile, together, connected.

I do not know if these moments will become memories for both or if they will find other ways to show a glimmer of themselves to one another. If play is their communication, I wonder if it will be enough to build a relationship on over time. When I am lucky to catch their exchanges, it is obvious they see and understand one another. 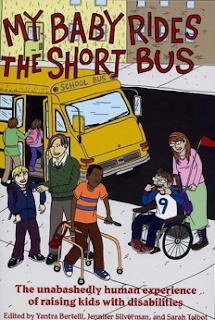 To enter to win one of two copies of My Baby Rides The Short Bus, leave a comment below about something you never realized until you had a child with special needs. I'll randomly choose two winners by September 23, announce them here and sent out e-mails. Please make sure you leave your e-mail if it is not visible on your blog.

Update: The book winners are Lynn and Mo. Thanks again to Yantra for this lovely post—and to all of you for leaving such moving responses.
Ellen Seidman at 12:05 AM