Q&A: How do you know when your child needs a speech device? 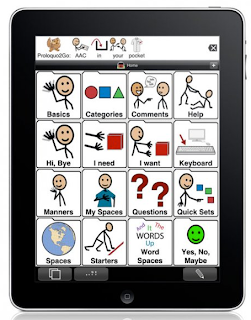 In the last couple of months I've been exchanging e-mails with Heidi, from AJ's Awesome Adventure. She had a speech question for me, and she said it would be OK if I shared my answer because it's a question I hear a lot:

I wanted to ask about Max's speech. When did you know it was not coming along at a "normal" pace? How did you deal? Did you try sign language, or was that the more difficult choice due to his limited arm/hand use? Why are you OK with auxillary communication systems? Help me to understand how they help, not hinder or make things easier. While I realize AJ is a different ball of wax due to his hearing loss, and learning to listen through his cochlear implants, I am curious.

When Max was little, this is a question I wondered a lot, too. I thought that getting him a speech device meant that he'd be codependent on it—and that he'd never develop speech. I also had to break through the mental barrier of accepting that I had a child who needed a communication device. I'd always known Max was at risk for having issues with speech, but I hadn't been prepared for the grief I'd experience of not having a kid who could say "Mama."

The stroke damaged Max's frontal and temporal lobes, the parts of the brain that control speech and language. As a baby, Max never babbled (although he did an admirable job of being exceptionally cute and smiley). He also had trouble retaining food in his mouth when he ate, a sign that he was having issues with tongue coordination (common with kids who have cerebral palsy). By the time he was three, he wasn't yet saying words. It was clear he was going to need some other way of communicating besides speech. For us, American Sign Language wasn't an option, because of Max's dexterity issues. He has some signs, but in the end, a communication device was the best possibility for him.

The more I researched it, and the more I spoke with doctors and speech therapists, the more I realized that a speech device would only encourage speech, not the opposite. The more means of communication Max had, the more he'd be eager to communicate in any which way he could. I wanted to be able to really understand his wants and needs, so I could nourish his intellectual growth, instead of constantly guessing or assuming what he wanted. I wanted him to be able to interact with other people, especially kids. Also, I didn't want him to get frustrated. He needed a way to express the thoughts locked up in his head, ones he couldn't quite get out of his mouth.

We started off using PECS (Picture Exchange Communication System) pictures. They look like this: 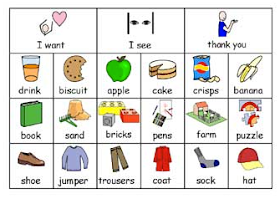 When Max entered preschool at three at a school for kids with special needs, the speech therapist printed out a whole bunch of PECS pictures in different categories (food, toys, bedtime, etc.) and created a binder full of them. We also mixed in actual photos. She laminated them, and attached Velcro to the back. When we wanted Max to choose things—say, at breakfast—we'd pluck pictures out of the binder (illustrations of oatmeal, pancakes, chocolate milk) and place them on a Velcro stand we made. It was his introduction to augmentative communication.

By the time Max was four, I thought he was ready to try a communication device. He loved computer stuff, and I figured it was worth a shot. The head of the speech therapy department said she didn't think he was ready, and a battle began. I knew she was wrong—what harm could come of trying one? It later emerged that no kid in the school had such a device. This department head didn't even know that our state had a lending library of devices through United Cerebral Palsy. We got Max an evaluation from a speech center at a hospital (necessary to get the school board to pay for it), who deemed him ready to try a device. By then, I'd decided to shift schools because I'd seen how non-progressive his was.

Max was on the Dynavox by age 5. Right before that we'd trialed the Tango, mainly because in a strange coincidence, a friend knew the genius guy who created it. It was so much lighter and cooler-looking than the Dynavox, and I loved that it used real kids' voices (unlike the more robotic-sounding ones on the Dynavox), but Max wasn't quite ready for it back then. He had a little trouble manipulating it, due to his dexterity issues.

We jumped on the iPad and the Proloquo2Go app. They've been amazing; I'll post an updated video of Max using them in the near future. Dave and I love this combo because they're super-easy to program and Max can carry the iPad around (the iPad is 1.6 pounds, vs. the Dynavox's 4 pounds, 11 ounces). Max loves 'em because they're easy to use and just plain cool.

Oh, and Max's speech? It is coming along. He's saying more words all the time and stringing ones together to form sentences, and even though they're not that clear he's trying. A couple of months ago, for the first time ever, I heard him lying in bed at night, babbling.

So, Heidi, here's what I say: Do more research online. Talk to the experts in AJ's life and see what they recommend. Find out if there's an association for the hearing impaired in your area that might have an expert to recommend. AJ might be fine with sign language alone, but it's good to educate yourself on all possibilities. We are our kids' best champions. And while we're no experts, sometimes we do know best.

If you've dealt with this topic, please jump in. Any experts out there who'd like to share?
Ellen Seidman at 10:43 PM