My kind of people: An amazing weekend with special needs families 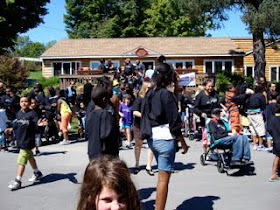 We don't often hang out with other families who have kids with disabilities. Occasionally, yes, like at a birthday party for kids in Max's class or when we arrange a playdate with one of them. Otherwise, on weekends we're with friends (only a couple of whom have kids with disabilities) or family or running around like maniacs doing errands or activities. It's not that Dave and I don't like being around other families like ours, it's just that we've never gone out of the way to forge the friendships.

I forget how heartening, comforting and life-changing it is to be around people who have kids with special needs—people who totally get it. Last weekend, I got the most amazing reminder. 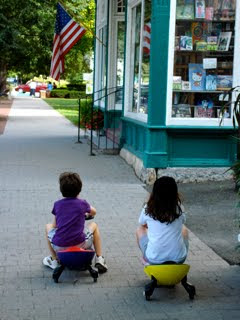 Max and Sabrina chose to tour the village by PlasmaCar. (I know, wouldn't it be great if they made them for adults?) Then we went to dinner at The Dakota in Pittsfield, a place my parents took me to as a teen. Max did not want to be there, and he made that known. As in, he screeched when we were seated. An elderly guy and his wife sitting at a nearby table glared at Max. "I don't want that kid near us!" I overheard him say to the waiter. I turned on my heels. "He has special needs," I said, caught in that weird place between I am ticked off/I am really upset you just said that. "Oh," the guy responded. Max eventually calmed down, but I was unnerved.

The following morning, Max screeched in the quaint dining room at our quaint hotel, The Red Lion Inn, because he wanted room service (I blame the Disney Cruise!) and again, people glared. Then we went to The Norman Rockwell Museum. As charming as the paintings were, it occurred to me that the artist had only painted typical families and typical kids doing their typical-life things. No kids with special needs in those paintings, no kid with sensory overload screeching his head off in the middle of a quaint restaurant, nuh-uh.

And then, we were off to three days at Camp Pontiac sponsored by The Starlight Children's Foundation. The brothers who own the camp, Rick and Ken, have generously hosted dozens of families for the past three years. This was our first time there and wow, did it feel like home. 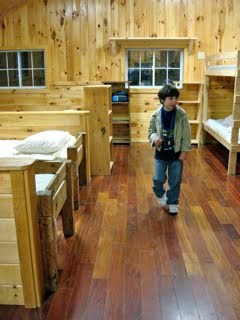 The camp was exceptionally good-looking, inside and out. Somehow, we ended up with an entire bunk to ourselves. 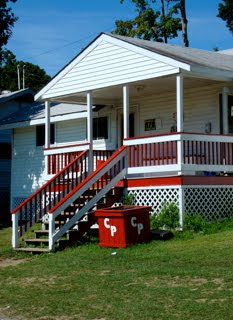 Not too shabby, eh?

The staffers and volunteers were beyond nice and accommodating. Once they realized that Max was obsessed with rides on golf carts—I mean, the kid would have happily slept in one if we'd let him—they gave him ride after ride after ride. 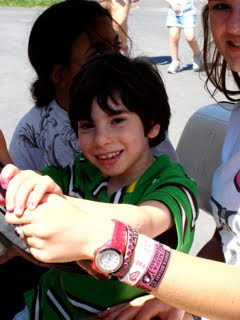 When he'd been on a cart for too long and other kids wanted a turn, I'd drag Max off and he would immediately trot over to another cart and smile at the driver, charmer that he is. 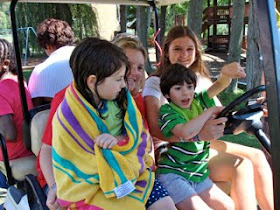 On Saturday afternoon he rode around in a cart for a good two hours. 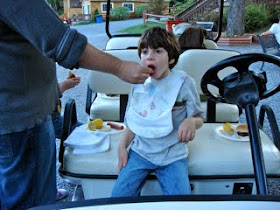 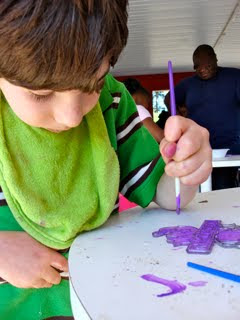 Happily, we did manage to pull Max off the golf cart for other activities. He painted a window pendant (in "ur-ul"—purple—of course)... 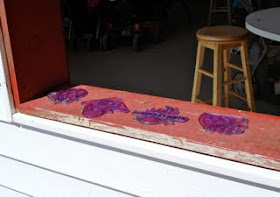 ...and then he painted a few more. 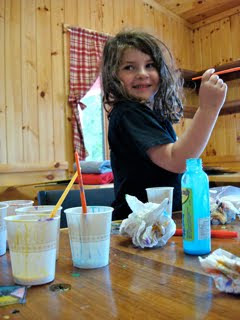 Sabrina made one, too. 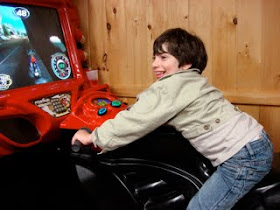 ...and played Skee-Ball with Sabrina. 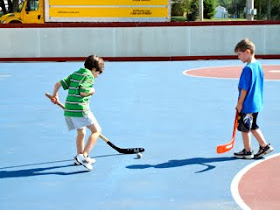 He tried his hand at hockey, which I only discovered when Keith, his golf cart chauffeur of choice, found me and said, "Max got off at the hockey rink." It was a wondrous sight. 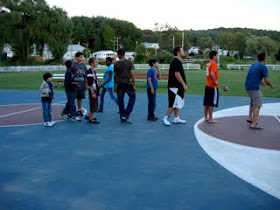 He lined up to shoot hoops with the big boys. 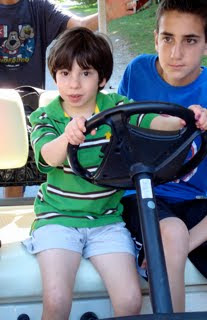 And did I mention he liked the golf carts?

Max opted out of the bonfire, swimming and movie night, though he was all for the ice-cream party afterward. 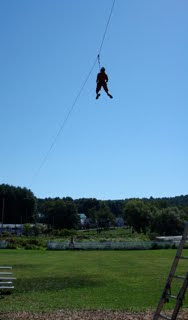 Not Max! Sabrina was also too chicken to zip-line. That makes three of us, four if you count Dave. Maybe next year; perhaps I could get them to hook a golf cart up there? Max also chose not to be in the big group photo. He screeched and wailed and let me tell you, nobody glared.

There were so many cute kids everywhere, kids who wanted to chat or ask questions about Max or, once, just sit quietly beside me and hold my arm. "Where is your sister?" asked one little boy, referring to Sabrina and thrilling me (could it be my new moisturizer?). I loved seeing siblings helping each other out. There was one teen with cerebral palsy whose brother was by his side for most of the weekend. It gave me a hopeful glimpse into Max and Sabrina's future, assuming those two don't kill each other.

Thanks to Max's busy golf-cart schedule, Dave and I had time to relax on benches outside of the canteen and hang with other parents. Within minutes of meeting, we were sharing stories about what happened to our kids. We had a long, cathartic discussion with another couple about doctors who had predicted the worst about our children. Dave had a nice talk with one father, who had sole custody of his six-year-old daughter, about encouraging our kids to talk. People also shared their experiences with other good-deed groups. If you have an ailing child who needs a plane ride to medical appointments, check out Angel Ride, a free service run by volunteer pilots. And if you know of a child with cancer or another life-threatening illness, tell their parents about Camp Sunshine.

Two days later, I'm still on a high from that weekend. Eternal thanks to Rick, Ken, the Camp Pontiac staff and volunteers, The Starlight Foundation, all of the great families we met and whoever invented golf carts. The sunshine felt good on my face, the kids' glee made me happy, the toasted marshmallows were yummy but just being around all those parents and families gave me comfort and contentment I don't often feel. 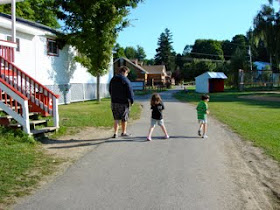