Kids With Special Needs Around The World: Greece

I started reading The Iron Chicken (tagline: "Life in the weird lane") a year or so ago. I love Emma's voice and spirit. She lives in Athens, and I thought she'd be a great person to feature for the second post in the Kids With Special Needs Around The World series.

So here I am, an English woman in Greece, with a Greek husband and a wonderful son who happens to have Angelman Syndrome (description: "A neuro-genetic disorder that occurs in 1 in 15,000 live births. It is often misdiagnosed as cerebral palsy or autism. Characteristics of AS include developmental delay, lack of speech, seizures, and walking and balance disorders."). Dimitri is 10, post-toddler, pre-teen; I’m 43, post-denial/grief, mid-extremely-irked-with-lack-of- services-and-general-discrimination.

Early Intervention is (supposedly) provided within the School Units for Special Education, from age 4 to age 7; other children may be integrated into regular classes, depending on their needs. There are few statistics on the number of children or adults with disabilities in Greece. It has been estimated that of 200,000 children with special needs in this country, only 20,000 attended public or private school. There are not nearly enough services for all these children; those with severe, profound and multiple needs are those most often left out. This includes children with autism; I believe 12 autism-specific “centers” were planned some years ago but the program was not completed. There are only two schools for children with visual impairment.

I have met many families whose children have never seen the inside of a public educational establishment, in particular children with severe, profound or multiple disabilities, my son included. School services and special ed are always delayed to start every year due to lack of teachers, school buses. For those who are integrated into mainstream school with a “parallel aide,” they may be waiting until December for the aide to arrive. No separate curriculum for children who are unable to follow the regular curriculum, no IEPs, frequently no Braille books in schools.

The government seems to have overlooked the necessity to provide accessible schools, with teachers and assistant, a curriculum, teaching equipment, and I just don’t like the arbitrary 1:5 teacher to student ratio in “special ed units." A class must have at least five children, a classroom of six to ten children has two teachers—nothing based on the needs of the children, just the numbers.... So anyway, my son attends a private “school” a long way away, for four hours a day plus four hours of travel. We are lucky we can afford to do this; others get by on a few hours of therapy a week and remain at home the rest of the time.

Obviously, lack of government and societal support sucks, but wouldn’t you just know it, life just keeps going on. So, on we go!

I’ve always believed that Dimitri should be included, involved and generally treated as much as practically possible as a “regular kid." To me he is a regular kid. It’s normal for Dimitri to be different. It turns out though, successful inclusion in life also requires myself to have good social skills, oh crap, darn it. I have to say I’ve pretty much failed when it comes to “playdates” and I hadn’t heard of the phrase “networking skills” until I became a parent.
It seems networking skills aren’t my forte (in person, at least—the Internet is so much easier). However, I’m pretty good at tootling about the neighbourhood with Dimitri. While not everyone is nice or understanding, there is an abundance of people in our neighbourhood who know Dimitri by name (although they don’t know mine) and take the time to talk to him. Some have known him since he was a cute, chubby baby, others more recently as a tall-for-his-age, sometimes sweet, sometimes not so sweet (he is 10 after all—possibly obnoxious-boy age?).
The way I see it, the more we go out, the more familiar we are to others, the more accepting they are (likely) to be. The word normal (such an annoying word) just seems to represent what we are personally familiar with. I hope, if people are familiar with Dimitri, they will accept him in the community, see him as any other kid (and later adult) and maybe, actually care about what will happen to him (and others) when we are no longer able to care for him. Seriously, you don’t want to know about supported living in Greece, it’s just too depressing.

All I really know at this point is, the woman at the supermarket checkout still talks to Dimitri even after he attempted to chuck that carton of milk at her....

In the face of being unable to change a whole country to become more accepting, less discriminating and to live up to home and international laws on human rights, I’ve decided that one thing I can do is make sure that there are people who know that we are here. 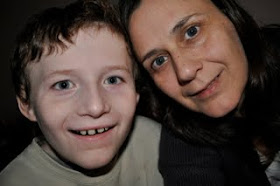