A kid who doesn't ask questions, a mom who never wondered why 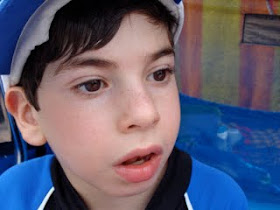 I'm going to be immersed in BlogHer for the next few days, so I kept the kids up late to spend more time with them. Sabrina has been asking a lot of questions lately and tonight, she was full of 'em.

During bathtime, she asked what had happened to some purple bath wash we'd had and I told her I accidentally left it at the hotel we'd stayed at this weekend. "Oh, so now other people are going to use it?" she asked.

When I told her to just ignore the wiggly front tooth that is bugging her, she asked, "What does 'ignore' mean?"

She also asked how books are made while we were reading Chrysanthemum (an awesome book about accepting differences). Then, as I was putting her to bed, she asked why her hair was curly, at which point I realized the kid was trying to put off sleep for as long as possible.

After Sabrina finally dozed off and I had some quiet time, it struck me: Max doesn't ask questions. There is a scary possibility it may be a cognitive issue, which I'll bring up with the neurologist on our next visit, but I know for sure that he can't yet articulate a string of words or raise the pitch of his voice to signify that a question is being asked. Perhaps there are questions trapped inside his head; it would be hard to demonstrate them with hand gestures, and we haven't tried q's on his iPad's Proloquo2Go speech communication app. Again, another one of those times when I'm wondering what is going through his mind.

I've never once thought about how asking a question requires an actual voice technique, until now. Over the years, Max's cerebral palsy has made me acutely aware of the vocal abilities and intricate tongue movements required for speech, so much so that I sometimes think it is a miracle Sabrina is able to gab away, as she does. A miracle. I am not one of those moms who ever wishes she could flip an "off" switch on her overly-chatty child because I hungrily gulp down all of Sabrina's words.

Obviously, Max has a whole lot of smarts. I've always known that. Doctors have long said they can tell Max is bright just by the look in his eyes. But this lack of questions? I'm not sure what's up with that. I'm also wondering how it's possible that my boy is 7, and I've never once thought about the fact that he does not ask questions. Or missed them.

That's kind of haunting me tonight.
Ellen Seidman at 10:15 PM