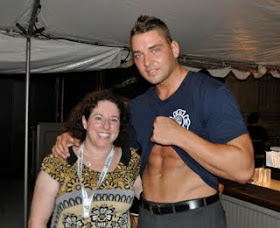 OK, it is not entirely factually true that all I got from the BlogHer conference was this New York City fireman. Because I didn't get to bring him home, though I did get some great tips; the pleasure of meeting some of my favorite bloggers in person as well as ones I'm going to start reading; assorted swag (I'll be giving away good stuff this week, excluding the firefighter); and some new perspective on what is missing in my life.

I am too hoarse to give you the whole BlogHer scoop tonight, since you know how hard it is to write when you are hoarse, so I will just share my epiphany on how I realized I definitely need to get out more.

I got invited to the Nikon party. I had heard tell of this party—that it was a great one to go to—though nobody had told me why. I arrived late on Thursday night. There was good food (cocktail franks! ice cones! open bar!) plus a whole table of cameras to lovingly fondle. I chatted with the very nice Lisa from Nikon for a while.

"Did you get a chance to meet the firemen?" she asked.

I thought this was a strange thing to say. If there were firemen there to make sure that the trés chic rooftop of the Bryant Park Grill stayed fire-free, why would I bother them?

I gave her a blank look. "What are you talking about?" I asked.

Turns out the men from the 2010 New York City Firefighters Calendar were at the party milling around. I am evidently too married, too suburban and possibly too pulse-less to have noticed.

Lisa said "Come on!" and dashed in the direction of the guy above, Mr. March. She did a quick photo shoot. After we walked away someone said, "Did you see his abs?!"

Nope. Cause I also hadn't noticed that Mr. March had flashed them.

Mr. March was not part of the little swag bag that we got at the end of the party, which is fine because I don't know how Dave would have felt if I came home with a New York City firefighter or where we would have put the guy or whether we would have had to declare him on our income taxes, but there were some really cozy silver slippers in there. I put them on and they made me extremely happy because, as you all now know, I am so married and so suburban.

Lots more to tell about BlogHer but right now, I seriously need to sleep.
Ellen Seidman at 10:25 PM