A day at Imagination Playground 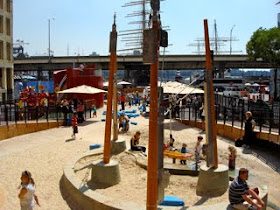 A few months ago, I read a magazine article about Imagination Playground, a breakthrough play area at South Street Seaport in New York City that encourages unstructured play. David Rockwell designed it, a big-shot architect who's tackled everything from hotels to the set design for the Broadway show Hairspray.
The piece mentioned movable foam parts kids could use to build stuff, sand, water structures, a tower to climb. It sounded fantastic, and much more exciting than the usual slide-swings-jungle-gym playgrounds. Then Beth from Role Mommy and Kim from Mom In The City invited a bunch of local bloggers to a family event at Imagination Playground. Is it weird that I was even more excited about it than Sabrina was? I felt bad, Max had school, but we'll definitely come again. 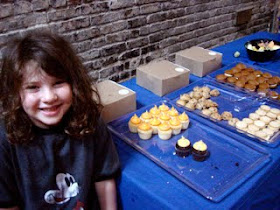 First, we had lunch at the lovely and fascinating South Street Seaport Museum, catered by 'Wichcraft and Stew Leonard's. Double yum. Sabrina was especially pleased that I let her have a cupcake before her sandwich (because, er, I did that too). 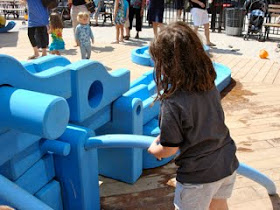 Then we hit the playground and like all the other kids, Sabrina jumped right in. I did wonder how they're going to keep the blocks clean; am I turning into my mother? Not that there's anything wrong with that, Mom. 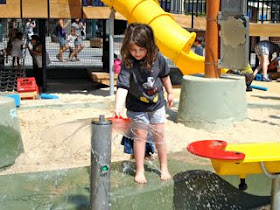 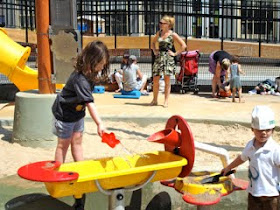 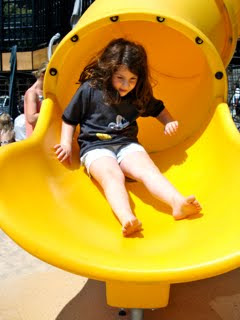 Overall, I was wowed; ditto for Sabrina, aka Ms. Picky. Imagination Playground is a really creative take on the standard playground. I also liked that there were park rangers there to supervise. A tiki bar with frosty drinks would have been nice, too. He, he. Sabrina's review: "It is fun to go to! I played in the water! I got sand in my sneakers! They need purple blocks for Max!" Be sure to bring good sunscreen and hats for the kids (there are a bunch of umbrellas but the play areas are out in the open). Imagination Playground is accessible to kids with disabilities—the playground is mostly level, and there's a ramp you can ride a wheelchair around that gives you a nice view of the entire space. I know Max would have a blast in the water play area.

If you're visiting New York and plan on exploring South Street Seaport, Imagination Playground is a great place to take the kids. 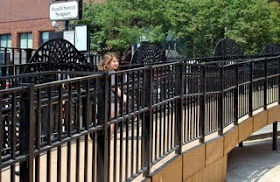 How are the playgrounds near your home? The ones by us are pretty good, but in my dreams, there would be one that's just for kids with disabilities.

Update: Beth shared a video she put together, check it out!