What's going on inside his head? 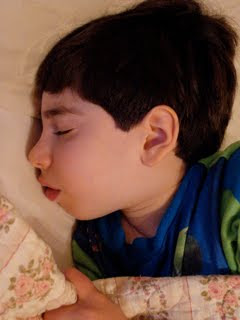 This weekend, we were driving around when Max got excited and started saying "ARRRR WAHHH!!!" ("CAR WASH!!!") over and over. Dave and I had no idea why. We kept driving. Max got more agitated. Finally, we stopped the car and let him direct us to where he wanted to go. His gestures lead us to a car wash. He'd been there with Dave a year ago, and he remembered exactly where it was. Amazing. He has an incredible visual memory.

Max's brain is, in many ways, a mystery to us...and to doctors too. We know the bilateral stroke he had at birth damaged several parts of his brain: the parietal and occipital lobes, and part of his frontal lobe. His brain stem—which controls vital functions like breathing and blood circulation—was spared. We don't know what sort of healing has taken place because we haven't had an MRI done since Max was a few days old, that turning point in my life when I first learned that a child could have a stroke. And that my baby boy had a stroke.

We agree with our neurologist that doing an MRI at this point isn't necessary. If Max's brain looks a lot better than it did in the horrifying MRI film from the hospital, that would be nice to know. But it wouldn't change the therapies he receives or how we treat him. And if Max's brain still looks really messed up, well, that would devastate me, and what good would that do?

So when Max shows us his smarts, as he does every day, I marvel at his brain. Yeah, the damage has done a number on his ability to talk and use his hands. But there are plenty of kick-ass cells in there doing their thing. I'm not sure if the stem cell infusion has helped, but whatever is going on, I'll take it.

At the same time, it's clear that Max doesn't quite get some things, and I want to understand why. Does it have to do with the parts of his brain that are damaged? How, exactly, are they affecting his intelligence and comprehension? One of the biggest things I wonder about is why Max doesn't notice when other kids stare at him or say things like "Ewww, you're drooling." He also doesn't always understand how to connect with kids. Sometimes, he'll pretend he's a monster and he'll run after kids and roar, but even when kids seem annoyed or scared, he doesn't stop. (Then again, who knows, maybe he's just got an obnoxious streak.) I also wonder why he has such trouble grasping concepts of time, like what "next week" means. Or why he likes to repeat stuff again and again.

I'm thinking of taking him to see a developmental psychologist. It's not that I want to get him tested to find out what developmental level he's at or what his mental "age" is; I long ago quit torturing myself that way. I just want to better understand the way his brain works.

What do you wonder about what's going on inside your child's head?
Ellen Seidman at 12:00 AM