Kids With Special Needs Around The World: Sweden 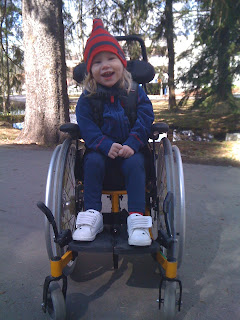 This is the first in a series of posts I hope to do from moms of kids with special needs around the world (e-mail me if you live abroad and would like to be featured, or know of someone who would). Please give a warm welcome to Towe and Tekla! I can't think of a more inspirational way to kick off this series.

This is a post from Sweden. My name is Towe. I'm 25 years old and work as a freelance writer and columnist. I blog at Smulgubbe and I am working on a children's book where the heroine is in a wheelchair.

I'm also a mother of a little warrior princess with cerebral palsy. The beautiful one is named Tekla, which is a Greek name and means "Through God's good reputation" (something like that). She is really a caring little fighter who loves to meet new people. Mostly the small ones. She was born seven weeks early by emergency caesarean section because my placenta broke prematurely. I was home alone when the major bleeding occurred and had to call the ambulance myself. Just 47 minutes after my call, she was born. When she was delivered she was not breathing by herself and was completely blue. The heartbeat, just a few irregular heartbeats. And a bit later, her lung collapsed....

She was on her way to dying. It was very close, but thanks to several talented pediatricians and surgeons she survived. Thank God. She laid in the incubator for a month and then she was actually declared healthy. It was eight months later that we began to suspect that the oxygen deficiency had done damage to her brain. She never kept up with their other children and both her motor activity differed significantly. Otherwise she was healthy and happy baby enjoying life, and rocking our world :)

Today Tekla is 3.5 years old and she is a bucket full of sunshine. She's still acting like a rock star, and I'm her biggest groupie. She just had an operation to get a peg in her stomach because she is not getting sufficient nutrition. She can eat by mouth but can't eat sufficient quantities required. The operation went very well, and as with most things in Sweden it cost us nothing. Indirectly, I have paid for it because I pay taxes. In Sweden, most of the health care is for free because we pay high taxes. Children who have some form of disability get habilitation. Rehab? Don´t know the right word. It gives you access to physiotherapy, aids, medical assistance and other necessary support. They also help to coordinate botox and orthopedic surgery. Etc. 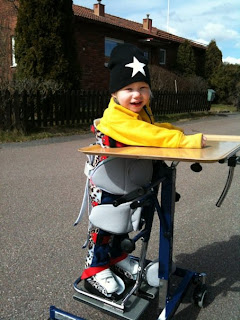 Generally in Sweden, support for children with disabilities is very good, although attitudes differ from municipality to municipality. But because of our tax system any help will be free and it works. Sometimes you have to raise your voice, it depends on where you live. In my family we have been lucky with the authorities. She attends regular kindergarten with an assistant who takes care of her, a little extra and it works out great. The first thing she says when she wakes up...well ok she don't speak but I ask her., "Hi starshine, you wan't to go to your friends?" And she nods very expectantly. Then we ride the wheelchair like its a Harley.

Other things that we get helped with:

- Horseback riding and hot baths are examples of physical therapy offered for children with both physical and mental disabilities.
- Financial assistance for the purchase of a car. Adaptation is done free.
- Renovation or expansion and adaptation of housing.
- People with certain disabilities are entitled to financial assistance. As a parent you can work yourself as an assistant for your child, or hire someone else. One can also apply for temporary housing with another family. We have that for Tekla and she lives two weekends a month with my parents as relievesr. You can also apply for respite at home. That someone comes to us a few hours a week and helps.

Being a special mother of a soldier like Tekla is really a privilege. I love the life that went so differently, and initially upside down. She has taught us so much about life—about gratitude and humility. That miracles exist and that nothing is impossible. That joy can take you around the world! And I'm so proud to be her mother. 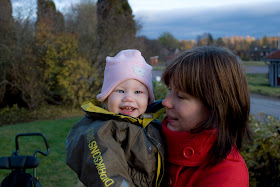