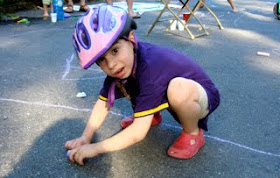 We had our annual block party this weekend, and it was spectacular, thanks to a guest appearance by Justin Bieber. Well, OK, he didn't come but the party still rocked. We live on a dead end and every year, come early June, nearly everyone in the neighborhood (which spans a half-mile or so) sets up tables and chairs on our street and we bring in a couple of those those blow-up bouncy things and kegs and the adults all hang and the kids run around like lunatics.

This year, there was also a dessert contest. In honor of it, I went to this outstanding Southern food place in our 'hood and bought a sweet potato pie. Not that I tried to pass it off as my own; breaking it out of the plastic sleeve as I approached the judging table pretty much gave me away. 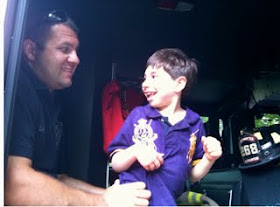 Every year, a firetruck comes by and stays for an hour. The firemen are so great with the kids. 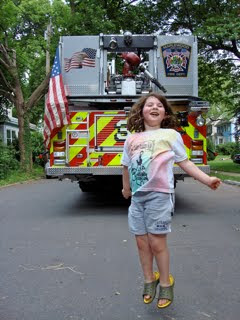 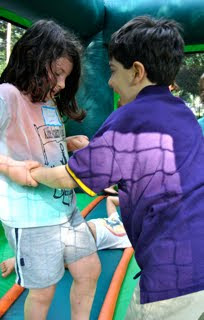 Max got a kick out of bouncing around with Sabrina... 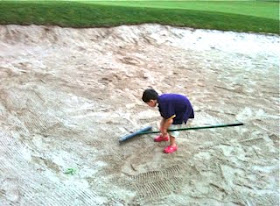 ...and raking the sand pits on the golf course at the end of our street. 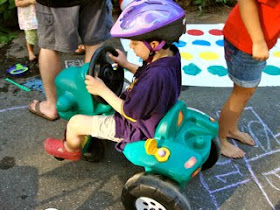 He did an outstanding job of navigating the crowd in his tractor. Look closely at the gas tank—he tucked a piece of purple chalk in there. 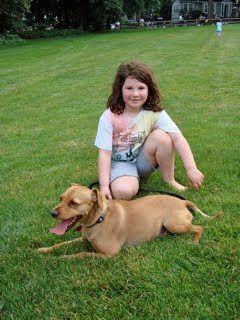 Sabrina with our neighbor's dog, the aptly named Barkley.

In some ways, this block party makes me aware of how fast time flies. Another year, another block party. Wow, all of the kids are getting so BIG! And look at all the new babies!

And in some ways, the block party makes me aware of how much I ache for Max to keep progressing. It's a little difficult to see the other kids growing up so fast while Max stays in the slow lane, moving at his own pace. Yes, he is doing so much more now than he was last year at this time, and that's beyond incredible. Yes, as long as he keeps progressing, that's what matters most. But this is one of those instances when I can so clearly see the gap between him and other kids widening, and it gives me pause. Not in an excruciatingly sad way or anything. Just one of those "Oh" moments.

Mostly, it made me happy to see him enjoying himself so much.

Oh, and in case you were wondering, my store-bought sweet potato pie did not win the bake-off.

Recognize these kids, circa block party 2007? 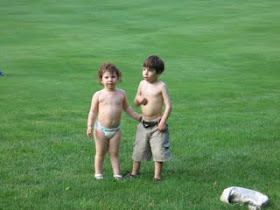