My child has special needs but please don't treat him special 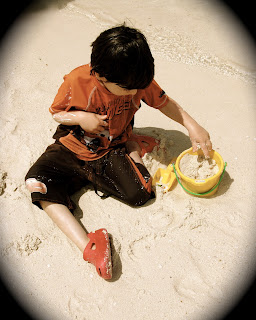 Today is Blogging Against Disablism Day, and people around the blogosphere are putting up posts. Disablism: discrimination against people who have a disability. The word conjures up people who do obvious jerk-like things to people with handicaps. But there's another form of disablism my son and I have experienced, a more subtle kind that may not seem like disablism at all: treating kids with special needs as if they are a whole other species of kid.

My son, Max, is 7 years old. He has cerebral palsy, which affects his ability to talk and use his hands. The cerebral palsy does not affect his sense of humor, his eagerness to play with other kids, his love for all things sweet, his curiosity about the world. He is a kid like any other kid.

The cerebral palsy does not make him some angel boy, either. He has meltdowns when you don't buy him a toy he wants, he's been known to hit you when he gets mad, he pulls his sister hair. In those ways, he is also a kid just like any other kid.

But that's not always people's perceptions. Some see him as a kid unlike any other kid.

I've had people ask if he likes to play with trucks or bubbles, as if he is playing impaired.

I've had mothers ask if he ever fights with his sister, as if he is incapable of sibling rivalry.

I've had mothers say things to their kids, in front of Max's face, along the lines of, "Honey, you can play with him, just pretend he's like a baby." As if Max couldn't hear.

Once, a stranger remarked, "Oh, that's so great he likes ice-cream!" as if his disabilities affect his potential for pleasure and joy.

I know that people don't mean to be mean-spirited when they say these things. Often, they are trying to be inclusive. But in the process of doing so, they end up making Max seem like an "other"--as in, a kid who is not just another kid. And they teach their own, typical children the same.

My son has special needs. But at heart, he is not special. He is a kid just like any other kid. Please treat him that way.
Ellen Seidman at 12:01 PM