Proud to be a pushy mom. And you? 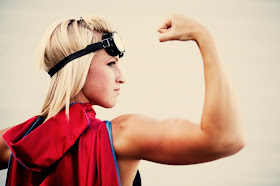 Hiya. I hope everyone had a fun weekend. The kids did...well, mostly. Sabrina had a soccer lesson, declared it "boring," then had to leave midway through to come home and go to the bathroom, in typical high maintenance style.

It was opening game for Max's Little League Challenger Division. Dave called me from the field. "He's crying and he wants to leave," he said.

"But he's always like this—he wigs out the first time, then he settles in, then he loves it," I said. It was like the first time Max ever went, all over again. "Please don't go. It's the only sport he plays."

Max eventually did agree to put on his uniform and the hat, but he refused to bat. So Dave left early and took him out for lunch.

I felt bad that I hadn't gone, but I didn't feel the least bit bad for pushing Dave and Max to stay. It's great for Max to have a regular sport to play, and I know he'll get into it once he's adjusted. Also, not for nothing, I think it's good for Dave to take his son to a softball game.

This weekend, I also pushed Max to work on his coloring; I refused to do it for him, as I often do. And I made him brush his teeth by himself. And get into his car booster seat by himself. And I coaxed him into making Sunday night dinner!

Lately, I have been pushing Max a lot. At seven, he's ready to be more independent. He actually does a lot more things on his own at school, like putting on clothes, feeding himself, going to the potty. But he gets all codependent at home, and we have to quit coddling him. Well, maybe just some coddling, and lots of cuddling, cause he's still so yummy.

I doubt any of our kids would be doing as well as they are today if it weren't for us pushy moms.

We give pushy moms a good name, don't we?!

photo/istock (What, you didn't think I dyed my hair blond and got muscles, did you?)
Ellen Seidman at 12:02 AM