Wills for parents of kids with special needs 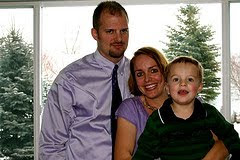 Kiera asked to write this guest post because she and her husband were getting their will done and thought it was something a lot of parents of kids with special needs struggle with. Kiera is one of the first mom bloggers I met; she's mom to Reichen (aka Little Dude), a handsome, happy and "sometimes-troublemaking-toddler" who happened to have a stroke before birth. He's getting his tonsils out today, so everyone send him get-well-soon vibes. Kiera blogs over at Ike Happens! I found what she wrote helpful and touching; I'm sure you will, too.

I am so proud to say that this month, after three years of procrastination, my husband and I finally sat down and met with a lawyer about getting a will in place. This was a LONG time coming and something that we really struggled with, especially knowing that our child had special needs. I am hoping that by writing up what we did, it might help others who are in the same position to see that it was not nearly as difficult as we thought it would be

Here is the process we followed:

• Custody: Who "gets" our Little Dude. This was by far and away the trickiest decision when planning our will, and most of the reason why it took us close to three years to get it done. I love my family and my husband’s family, but when it comes down to it, none of them are us. It is hard to imagine your child in another person’s life and you not being in their life. We had to move past that and decide what was non-negotiable for us for the people raising Little Dude.

Some of the factors we used to decide it were:
- Will he be located close to both families?
- Will he be in an area that has good schools with known special needs programs, to help with any individual education plan needs he has?
- Will the custodians be willing to take on the sheer volume of therapies, doctors appointments, specialists and annual check-ups that are required for any child who has had a stroke?
- Will they take him into the family and give him all of the love, hugs, kisses and cuddles that he deserves?

• Financial: Who gets to control Little Dude’s money? For us this was an opportunity to make sure that both families are still involved in Little Dude’s life. We specifically picked someone from the other side of the family to handle the financial side to ensure that there was a tie between the two sides.

We used a similar set of factors to decide who this would be:
- Who would work well with the custodial parents?
- Who do we know will always be on the lookout for the best interest of the Little Dude?
- Who will be willing to say “no” to the Little Dude if they felt it was not in his best interest? (Trust me, this person has a spine of steel and will be great at this if needed!)

• Deciding on a Special Needs trust: We spent quite a bit of time talking about this. Ellen already addressed some of these points in an earlier post on estate planning, which helped to prepare me with questions to ask the lawyer. We ended up deciding not to use one, but that was based completely on our situation and it will differ from family to family.

• Finding the lawyer: Once we had a general idea of what we wanted to do with custody and financial considerations, we started asking friends of ours who they used to set up their wills. I called and interviewed the one that was most highly recommended. I asked her about her experience with special needs kids & with family wills. I found her easy to work with and very knowledgeable. She sent me a packet of information to fill out to ensure that we had all of the information we needed at our first meeting with her.

• Dealing with the emotions of making the will: Halfway through the first meeting with the lawyer, my husband stopped, looked me in the eye and told me that he never realized he was married to Stephen King. Yes, it is a very morbid experience to talk through the will. You need to go through scenarios that you have never thought about. For example “So, if I die, then he dies 36 hours later, whose will would take precedent? How is that different than if we die 12 hours apart?” (Yes, in our state there may be a different reading of the will depending on the time between deaths). The paperwork sent out ahead of time was hugely helpful to us in that meeting

• The cooling off period: After meeting with the lawyer the first time, she let us know that it would be a couple of weeks before she delivered the will. She purposely does that because the initial discussion always sparks things that families would like to have added. In our case, that did prove true. In between the initial meeting and the draft being delivered, my Nana passed away. In watching the activities that my family was going through, it reminded me of things that needed to be added and clarified. We ended up sending a couple of different modification

• After the will: As I write this, we are still in the process of getting the final draft of the will. We have already asked for multiple copies so that we can provide one to our financial advisor to put in his safe, one for each of the guardians and one for our files.

There was one additional activity that we did that was not included in the will in writing. We spoke to one of our favorite therapists and asked if we could give her name as the primary contact to the guardians in case something happened to us. She is a wonderful person and we know that if something should happen, she would be a great resource to introduce the guardians to Little Dude’s care team and get them up-to-date on the most recent treatments.

With all of this, I now have resorted back to hoping that we never need any of this since we will be around to watch the Little Dude grow into a Big Man.
Ellen Seidman at 12:01 AM