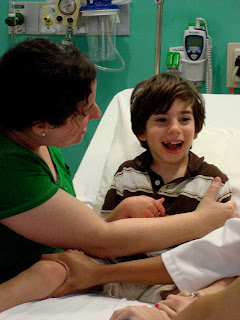 "If it couldn't hurt and it might help, we'll try it." That's pretty much been our motto since Max's birth, and it's why we did stem cell therapy back in August. As far as we could tell, it wasn't going to harm Max, and there was potential for it to do some good. So we got the infusion at Duke with with Dr. Joanne Kurtzberg, using stem cells from cord blood we'd banked at Max's birth. We only had enough for one shot.

Lately, some of you have been asking whether the progress we've seen in Max is from the stem cells. My answer is, I don't know. Nobody does. Duke didn't do an MRI before the infusion or request a comparative one after, since conventional MRIs aren't sensitive enough to show differences in the brain of a child with cp. However, I've heard Duke is going to be doing another study where they'll be trying out a new type of MRI that is more sensitive.

We've hit the six-month mark, the time when changes might kick in, although they can also show up before...or not at all. In recent months, I've seen small but marked improvements in Max. He is more spontaneously using both hands. He is trying to speak more words. His overall cognition seems improved—he's always been alert, but now he seems even more so. I have not found any data that stem cell therapy can trigger an obsession with the color purple.

As Dr. K says, "I'm glad Max continues to improve, for whatever the reason."

Here's a recent CBS video about a newborn who got an infusion at Duke University. I continue to have tremendous hopes for the potential of stem cell therapy to help our children, and the groundbreaking work Dr. Kurtzberg is doing.