Should we have a third kid? 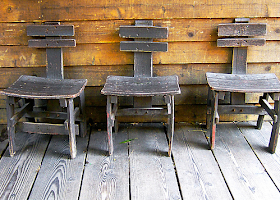 OK, this may just be the post where you're going to think that I've lost it. Because I am opening this blog to a discussion about us having a third kid. For the record, this is not going to be like a reality show where you vote on what we should do and then we'll go and procreate...or not. OBVIOUSLY, this is a decision only we can make. But I'm throwing this out to the the wisdom of the web, and the thoughtful people who visit here, because I'm genuinely curious about your experiences and any deliberations you've already worked through. I'm interested to hear perspectives we may have not yet considered. As it is, I already grill every single mom I meet who has three kids.

We want to have a third child.
We're hesitant to.
We'll wait a few months.
No, we've already waited a few months.
But we're not quite ready.
But is anyone ever really ready?

I'll just lay out the main pros and cons in cold, hard type:

PROS
• Dave is an incredibly hands-on dad, so even though we'd be physically outnumbered we'd have two involved parents juggling three kids. Not such a bad ratio, considering.
• We can afford it, more or less. And if it ends up being "less," we'll deal. College, three square meals a day and clothes on your back are highly overrated.
• Another sibling to encourage Max. Sabrina's been a great influence: She's encouraged him to try to talk, to eat and drink on his own, to use the potty, to sing silly songs, to jump on the couch (that's something you welcome when your kid has physical challenges), to stand up for himself. I've written before about how when Sabrina annoyed Max when she was little, we'd be secretly pleased to see Max swat the pacifier right out of her mouth—an amazing display of dexterity for a kid who has such trouble using his hands.
• Another sibling to care for Max when Dave and I are not around. Sabrina already helps him a lot when she's not trying to maim him or put the blame on him for something. I feel this intense mix of joy and sorrow when I see her cover him with a blanket because he can't quite grasp it, or when he trips and she rushes over to pick him up, or when she talks for him, or when he gets upset and she pats his back and says the only three words that bring him comfort: "Max loves purple!" Seeing her with him is a reminder of the care that Max needs, a reminder that Sabrina is going to be there for him alone unless there's another sibling to help. Although who knows, said sibling could turn out to be a jerk or a free spirit who wants to backpack in Nepal and have nothing to do with Max. It's a crap shoot. I guess it all is.
• Another baby: yum. We've made some pretty cute kids so far. I am personally not looking forward to the teen years, but I am sure that by then there will be an app for managing teens.
• I don't want to be 70 years old and regret not having another child.

CONS
• Another child will mean less attention for each child...especially for Max. And he needs as much of our attention as he can get. As it is, I feel guilty about all the stuff that I could be doing for him but don't get to often enough. Another child will mean even less time for programming Max's speech device, doing therapeutic play with him, massaging his limbs, and the countless other responsibilities I have as a parent of a child with cerebral palsy.
• It's hard to imagine going back to the infant days (make that infant daze), although when I was recently talking with my ob/gyn about this she said to me, not unkindly, "You're not completely out of the baby stage." She's right. Max still requires certain help.
• I'm worried about handling three kids on my own. When I go to a busy place with Max and Sabrina, like Target or our town center, I need to hold Max's hand at all times; sometimes, he darts away and I have to run after him. How would I juggle him, Sabrina and a baby? I know, the baby would eventually grow more independent and hopefully Max will, too, but when I picture the four of us making our way down the street, it terrifies me. Even though the baby is really cute-looking.
• I like having a life, or at least some sliver of one. There, I said it. Another kid would mean less time to enjoy Dave, have a hobby (coming soon!), read, write, think, savor.
• Of course, we could adopt; there are so many children out there who need a home. The world is already overpopulated, and we're draining our natural resources. An environmental activist I know once described a third kid as a "Hummer," and I've never forgotten it.

Whew. Just getting that out has been helpful. But still, I want to hear: If you were us, would you have that third child?

Photo by Robin Keefe
Ellen Seidman at 12:16 AM