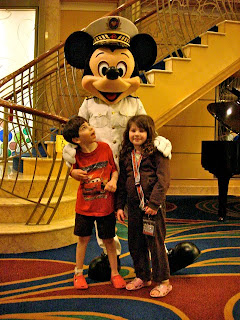 Before I went on a Disney cruise, I thought cruises were cheesy; too many years of watching The Love Boat will do that to you, I guess. Not Disney's. We were on The Wonder (last year we went on The Magic), and they're both almost identical and in beautiful shape. They're also meticulously clean, one thing you really want in a ship. The crew bent over backward for the four days we were onboard to make both kids happy and accommodate Max's needs.

We were chosen by the kids' club staff (a drop-off place to leave the kids and flee for the sun deck) to be the Family of The Cruise. I'd like to think it's because of my wit and good looks, but I have a feeling Max charmed them. 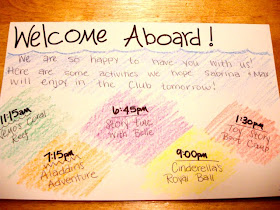 Every morning, they made a personalized card for the kids and posted it on our door. At the end of the cruise, they gave us a bag of goodies for them including sun hats, Disney pillowcases to color in and t-shirts. Sweet!

There were several times each day when you could meet up with the characters. Max was enchanted every time. He'd squeal, he was so excited. If the line was really long, sometimes they'd let us go right to the front. If things were on the quiet side, though, I'd have Max wait in line like every other kid. He has sensory issues about crowds but still, I don't want to spoil him. 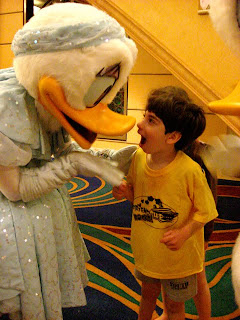 He decided that he wanted to really impress Daisy. So he went right up to her and snorted. Max had a bit of a cold, and he's recently learned how to blow his nose, something he's quite proud of (he has issues with air control). Sure enough, a big glob of grossness came right out of his nose. Max looked very pleased with himself, Daisy keep her poise, I made quick use of tissues. 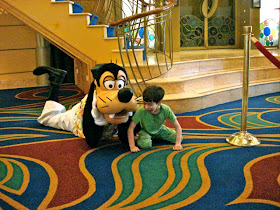 Goofy got down on the floor and rolled around for Max, who joined him. Oh, and yes, Max is wearing his pj's. He declared one day Pajama Day—not a bad idea, right? 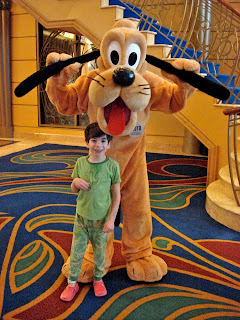 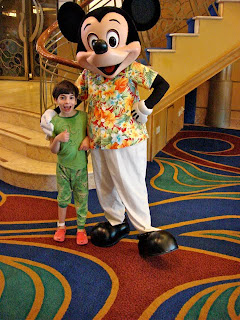 And, of course, he was in awe of Mickey. 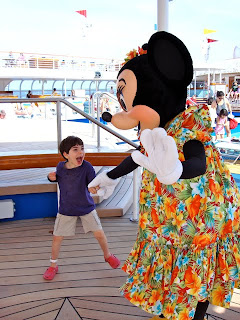 Here he is with his future wife. I think he and Minnie were practicing a jitterbug for their wedding first dance, but I can't be sure. 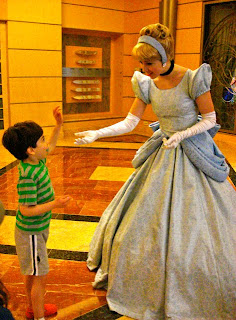 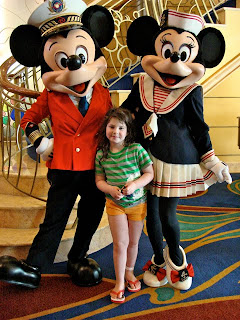 Sabrina got a kick out of the characters, too. She liked to flash her cabin card at them because it had her name on it. 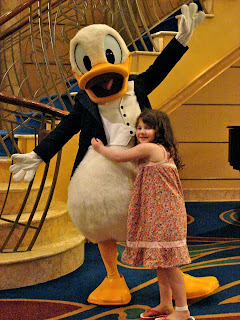 This is the only time she wore a dress; she still only wants to wear Max's stuff. I'm thinking it'll save me a bundle on spring clothes. 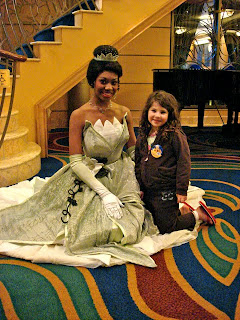 Sabrina had firmly told me, before we left the cruise, that she wasn't into princesses anymore—except for Tiana. Just in case, I brought the Snow White dress she wore for all seven days of our cruise last May, but true to her word she did not wear it. 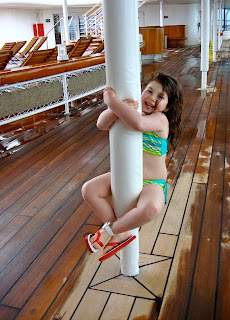 She loved the pool. And pole dancing. 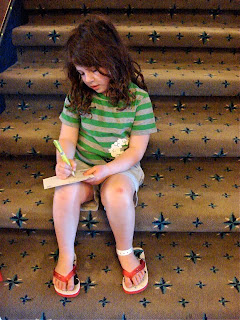 She wrote her first postcard and sent it to her pre-K class.

The ship stopped in Nassau the first day. It was pouring, and we'd been there before, so we just roamed around the port area, which is filled with jewelry shops. Dave is obsessed with watches and he had to try on one at every store. He also got a bargain cigar, just because (he doesn't smoke). On the second day of the cruise we hit Castaway Cay, Disney's private island. It's beautiful. We played on the beach, enjoyed a barbecue, took naps (OK, that was just me). 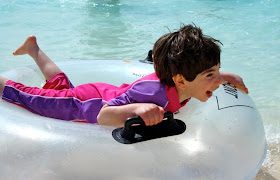 This was one particularly beautiful sight to see, let me tell you. It's the first time Max ever did any kind of floating by himself with a tube. And, yes, he is wearing Sabrina's suit because it has purple in it. 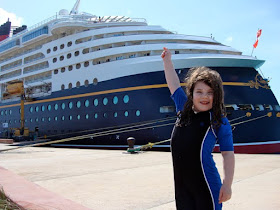 Sabrina, of course, had to wear his.

There were a ton of activities on board. You and the kids could go to a dance class, mini soccer, Disney movies—we got to see Alice in Wonderland, which was fantastic. There were also plenty of grownup activities, including cooking demonstrations, wine and beer tasting, Pilates and other exercise classes. Dave and I mostly vegged out, went swimming (hel-lo, hot tub), and roamed around the ship with the kids. They are big fans of shuffleboard. They are also big fans of eating their body weight in ice-cream.

True to form, Max preferred room service over going to the ship's restaurants. A couple of times, he and Sabrina stayed at the kids' club for dinner, and they fed him, no problem. Although they do not change diapers, they give you a pager so you can be on poop call. The staff really looked after Max, helping him do crafts and even changing his shirt when it got wet from drool. And best of all, they remembered to refer to him "Purple Max." I am thinking of getting his name legally changed.

One night, Dave and I dined at the Italian adults-only restaurant, Palo. It was excellent (the food is generally very good, and I have an extra three pounds to prove it). Dave, Sabrina and I also saw shows at night including Toy Story, the musical, and The Golden Mickeys. Max happily stayed in the kids' club, because performances wig him out. 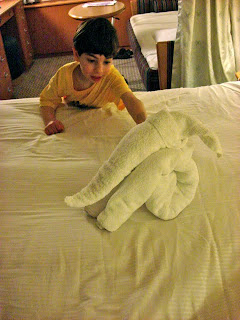 Every night, our cabin steward would leave a towel animal; this was Max's favorite. 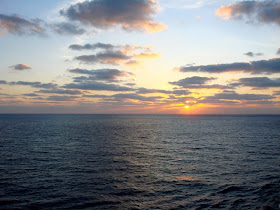 I know, I want to be there too. 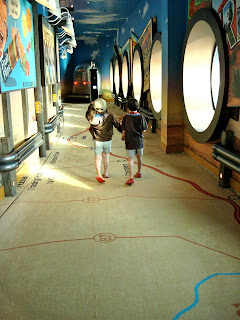 Our four days flew by. The kids were bummed about getting off the ship, but they had Disney World to look forward to. Disney trip part 2, coming up. Off to make the towel animals!
Ellen Seidman at 12:03 AM