It's Cerebral Palsy Awareness Day and hello, world, my child is not a tragedy 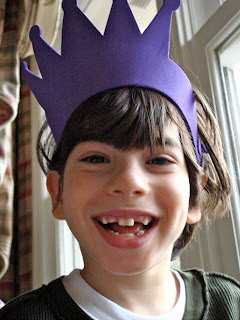 It's impossible to remember exactly what I thought of cerebral palsy before I had Max. I'm pretty sure I could only picture a person in a wheelchair, but I'm not sure. I didn't know anyone who had it. I had no idea it could be mild, and I certainly had no idea of the complications it could bring.

Then I had a child with CP.

The words "cerebral palsy" can sound pretty awful. They literally mean weakness (palsy) having to do with the brain (cerebral). The condition is caused by an injury to the brain sometime around childbirth. Max lost oxygen during birth, which is what caused the brain damage and resulting cp. Here's a good description of what cerebral palsy means from The Centers for Disease Control, although geez, how old is the photo of that little girl?!

Having CP basically means your brain doesn't send the right signals to your muscles, so they can be messed up (to use the medical terminology). There are four kinds of cerebral palsy: spastic, athetoid, ataxic and mixed. Max has spastic four-quad CP, so he has increased tightness in all four limbs, as well as his feet, torso and jaw.

I was shocked to discover just how much the CP messed with Max's ability to eat; the tongue, as it turns out, is one of the body's most hard-working muscles. Chewing and swallowing require all sorts of intricate movements that may not come easily to someone with CP. Max sure does love to eat, but food and liquid dribble out. The other main way CP affects him is that he has a fair amount of trouble using his hands. Manual dexterity is a challenge, particularly in his right hand (the brain damage is worse on the left side of his brain). His arms are tight, so swimming is not yet possible. And he cannot speak clearly, because of tongue challenges and because his brain isn't sending his mouth the right signals. He also has cognitive delays.

And then, there's the reality of Max. He is a really bright kid who's well aware of what's happening in this world (and who never lets his little sister put one over on him). He likes to learn, and picks up things quickly. The cp hasn't prevented him from walking or riding a bike. The cp hasn't prevented him from playing with trucks, coloring, downing ice-cream or doing all the other stuff little kids love to do. The cp has not affected his incredible determination, his spirit, his sunny disposition, his sense of humor, his fantastic attitude. Max doesn't yet know he has cerebral palsy. Someday, he will, but I'm not concerned it will change his perspective on who he is.

If you don't have a child with disabilities, the cerebral palsy may seem like a tragedy to you. I'm here to say, it isn't. Do I wish he didn't have it? Of course I do. But do I wish that I didn't have a temper? Yes. Do I wish that Dave didn't have such trouble listening? Yeah. Do I wish that Sabrina was more patient? Yes. We all have our weaknesses, and while Max's may be more involved and more obvious, they're part of who he is.

Cerebral palsy has not defined his life.
Ellen Seidman at 7:37 AM