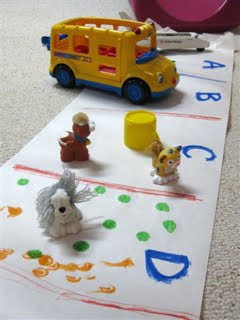 I'm away at Blissdom, learning lots and occasionally partying (but just occasionally, you know), so I roped in a guest blogger, Amy from Teach Mama. I sat next to her at a seminar when I was at BlogHer this summer. She's mom to Maddy, 6; Owen, 4; Cora , who's almost 3; and two guinea pigs of indeterminate age. Amy's a former high school English teacher turned reading specialist; she tutors a few times a week and does some literacy consulting for schools in her area. She's always trying to sneak learning into her kids' lives, and shares all sorts of genius tips on her blog and over at We Teach, a forum for parents and teachers. I know you'll adore her. I'll post about Blissdom soon!

I’m always on the hunt for ways to keep my kiddos’ brains and bodies moving, no matter the weather.

So when Ellen asked me if I had any tricks up my sleeve that I was willing to share with her readers while she was away for a blissful few days (waaahhh!!! I wish I were with her!!), I had some ideas for her.

However, the way things turned out, she was the one who suggested that I turn my Backyard Alphabet Hunt into an indoor activity since the weather’s been so darn ugly for the last few weeks.

The Indoor Alphabet Hunt is an easy activity that takes very little prep and that with some support, all learners could enjoy.

The Indoor Alphabet Hunt is really just a roll of paper (that I picked up at the Dollar Store a while back) with each letter of the alphabet on it. And you got it: The kids hunt for objects around the house (or room, if you want to keep it simple) that begin with each letter. When they find one, they place it on the roll of paper. The amount of assistance you give the “detectives” varies depending on their ability, age, and comfort level with the letters.

On the day we did this activity, I happened to be watching a friend’s three-year-old, so I had Owen, Cora, and Ava under the roof. I said, "Okay, friends, we cannot go outside this morning, since it’s cold and rainy, so we’re going to hang in here and play detectives. I know Owen and Cora are great at being detectives because they’ve hunted for things with me before, so Ava, are you ready to show off your skills and be a detective with us?"

Luckily, she said she was, so I went on:

"This is our job: We have to hunt around the room to find one object for each letter of the alphabet. There are a lot of letters, but I think if we work together we can do it. Are you ready? And we will use these little Bingo dotters (fyi: we call them ‘dotters’, but I really think they’re ‘daubers’), to put a dot near each letter once we fill up the box."

So I looked around the room with them, as I said, "Hmmmm, the first letter is A. What things begin with the letter A?"

We came up with airplane, apple, alligator, and ant. Owen found a space shuttle and screamed, "I found it!! An airplane!"

We all gave him big claps and a huge woo-hoo as he put the shuttle under "A" and smacked it down with a dot. (Really, we’re not being picky here—if the kid thinks it’s an airplane, we’ll give it to him, right?)

Sure, the kids came up with funny things like Cora’s Baby Kate for "K" and underwear for "U" (no, we didn’t add them to the hunt), but the hunt also opened the door for some new opportunities for learning. Owen has some difficulty with distinguishing his "T" and "S" sounds, so when he put a truck under "S" I said, "Owen, tell me what you just added under S."

I said, "I know it sometimes sounds like an S, but tell me what sound you hear when I say it: ttttttruck, truck. . . tttttttruck. Listen when I compare the words: truck, suck. Truck. Suck. Can you hear that?"

I’m not sure if he totally understood it, but for the time being, maybe he did.

And that’s how we went through the Indoor Alphabet Hunt for maybe 15 or 20 minutes of the morning—just as long as they were interested in doing it. With our Backyard Alphabet Hunt this summer, I think the event took two separate mornings to finish. The idea is to sneak in a little bit of directed learning when we can, when kids are ready, and when we have tiny open windows.

And any time the learning is fun, a game, or a little challenge, you're more likely to get interested players.

Consider:
• Starting with only five letters, or only one letter at a time.
• Putting each letter on a separate piece of construction paper to make it more concrete.
• Put two or three objects together and say, "Here is an apple, a truck, and a hat. We need to find something that starts with (whatever letter). Does ‘apple’ or ‘truck’ start with A?"
• Finding the objects yourself and having your little one be the one to set the object down by the appropriate letter, then ‘dotting’ or checking off that letter. 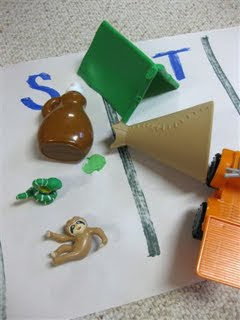