A giveaway for parents of kids with sleep problems 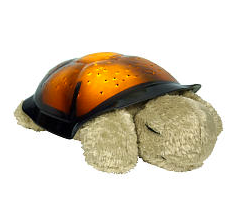 I've written before about the kids sleeping in our bed—on November 3, 2008, to be precise. I haven't said much about it since because nothing had changed.

But Dave and I were getting increasingly fed up. Two adults and two kids in a queen-size bed isn't all that fun, or conducive to good sleep. It's not conducive to lots of other stuff, either. So Dave and I came up with a plan.

First, I went to a local store and bought a Cloud B Twilight Turtle (above). I'd seen it advertised, and it looked cool. It projects a starry night sky onto ceilings and walls in three colors—blue, green and amber. Heck, I wanted one for me.

Then I ordered Pillow Pets. The kids had seen them on TV and were asking for them. Call us suck-ahs, call us desperate parents, whatever. We got Max the purple hippo, Sabrina the dalmatian.

Last, and this was Dave's brilliant/desperate idea, we blew up the Aerobeds we keep in the basement and put them in Max's room.

Then I told the kids that we would sell them to a traveling circus if they did not sleep in there. 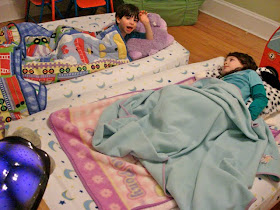 In the last few weeks, the kids have happily gone to bed in Max's room. The Twilight Turtle stars and moon are mesmerizing—Sabrina likes to try and count them. The kids think the beds are fun, and the Pillow Pets are cuddly.

OK, so the kids still end up coming to our room in the middle of the night. But this is half the battle, won.

I asked The Cloud B peeps if they'd be game to spread the sleep love around, and they offered up two Turtles as giveaways, each worth $34. 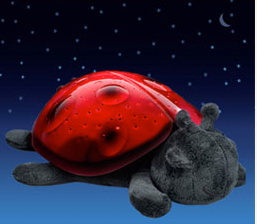 Or you could get the ladybug version, if you'd like.

To enter, just leave a comment about your child's sleep habits...or lack of habits! Also, mention whether you'd like the turtle or ladybug.

BONUS ENTRIES: After you leave your main comment, do a separate comment for each of the following that you have done:

This giveaway is open until Thursday, March 4, 11:59 p.m. EST, and is for U.S. and Canadian residents. I'll pick the winners via randomizer.org, announce the winners the next day, and alert you by e-mail. Good luck!
Ellen Seidman at 1:23 PM