The first time's great, but the second? Even sweeter 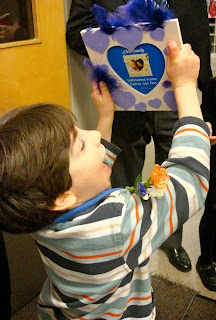 Every single first has been a euphoric experience. You know the feeling: It is irrefutable proof that, yes, your child IS capable of doing the very thing you've been dying for him to do (and, perhaps, the very thing doctors doubted your child would do). I've whooped, I've cried, I've done a crazy happy dance, I've kissed the ground that Max walked on. Yes, I got down on his bedroom floor and kissed the hardwood. There have been smaller but still significant firsts, too. Like the first time Max nodded. And the first time he said the consonant "D," a tough one for him. And the first time he swung a bat.

But then, there's been the inevitable letdown following Max's firsts, as they have not immediately lead to seconds and thirds and fourths. After Max does something for the first time, he tends to not do it again for a while.

I think this sort of thing happens with typically-developing kids, too. It's just that when you have a kid with special needs, you put a lot more weight on those firsts. And when they don't repeat themselves right away, it can be quite the let-down. For me, the second time Max does something is even more of a bigger deal than the first. And the third. And the fourth. Because they mean that Max is truly getting something.

Take the potty training. Before I left for the Blissdom conference, I was so excited that he'd peed. He hasn't done it since and I was bummed, even though I knew it was going to happen on Max's own timeline. Then last night, he pooped on the potty—perhaps you heard my screech "MAX POOOOOOOPED ON THE POTTY!"? And let me tell you, that was even more exciting than his first potty success.

Another major second happened last week. Back in the summer, I wrote about how psyched I was that Max had attended a carnival at his school, despite his fear of crowds and loud noises. And that he tried his first mojito. Kid-ding! In December, I took him to a school holiday sing-a-long. No problem, I figured. But I couldn't even coax him into the room. It was doubly disappointing, because I had thought we were over the crowd meltdowns.

So I was dreading the Valentine's dance at his school, held belatedly last Thursday night. It sounded awesome—music, crafts, cupcakes. Yet all I could picture was Max running down the halls, wailing, which is exactly what had happened at the sing-a-long.

Only this is what went down. 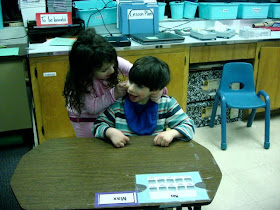 When we got there, Max wanted to go to his empty classroom and hang at his desk. Dave and I let him; we figured that if we could ease him into things, start off quietly, maybe he'd be OK. 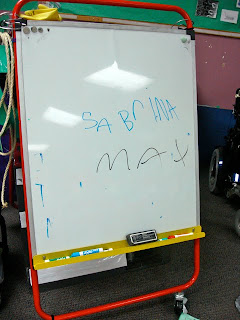 Sabrina was fascinated to see her big brother's class, and made sure to leave her mark. 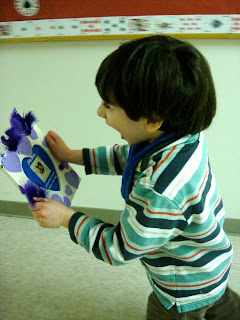 Then we lured Max into a room where they were making crafts. Luckily, there were purple feathers to be had. Wow, was he proud of the picture frame he made. He took off with it, squealing, and showed it to everyone he passed in the hall. 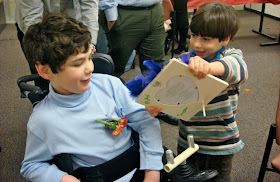 He made sure to show it to his friends, too. 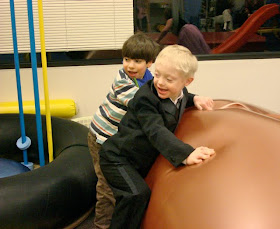 Then he ran into the indoor gym and found one of his best friends there. 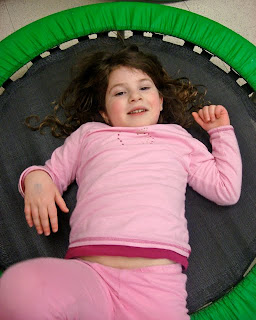 Sabrina was having a blast, too. 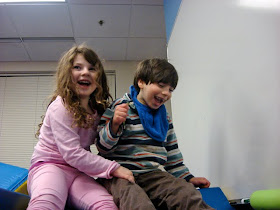 Why can't they be this nice to each other all the time?! Oh, right, then they wouldn't be siblings. 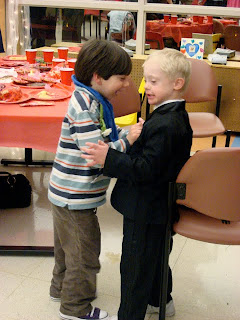 And then, OMG OMG, Max ventured into the gym, despite the crowd and loud music, and found his BF again. 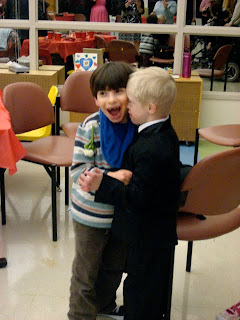 He hugged him. He kissed-slurped him, too. 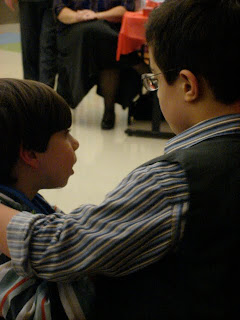 He found another friend and hung with him. Sabrina, by this point, was the one wailing. She was getting mad that Max was dissing her for his friends. Then a song came on that she liked and she started jumping around and dancing with me. 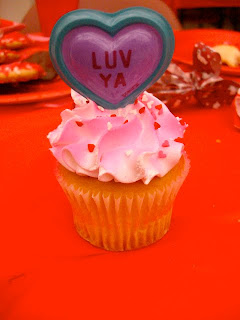 Later, Max had a cupcake. Oh, what a night.

At the end of the dance, Dave had to haul Max out of there kicking and screaming because he did not want to leave.

I don't think any of us could have had a more unexpectedly enjoyable night.

Do you know what I mean about the firsts/the seconds/the thirds?
Ellen Seidman at 12:07 AM