Blissdom, part 2: Giving back, hanging with the Harry Connick Jr. band, 10 ideas and someone get me out of my pj's 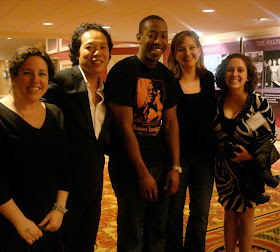 Ever since I came back from Blissdom, I have been experiencing a phenomenon called Bliss Brain: My head is so full of ideas and gotta-dos, I don't know where to start. So I'll just do the world's longest Blissdom recap of tips, ideas and eye-openers:

• Seek out encouragers. A motivational coach by the name of Kevin Carroll gave the crowd a big pep talk (and wow, was he peppy), and this was one of my favorite rules of success. It's all about having what I call a Team You—people who support what you're doing, who motivate you, who are proud of you. Dave's on my team, of course. And then there are my friends Wendy, Hedy and Paola who regularly give me props and encouragement. And then there are new friends like writer Mare Henderson, who leaves messages on my Facebook page such as "Max = superhero." And mentors like the lovely and talented Jo at Cup of Jo who is always generous with advice; social media pro Kim Moldofsky from Mom Impact (go register at her site to be share your opinions on new products); and Nancy Martira at Ketchum, another social media guru who recently helped Twitterfy my little brain. FYI, I regularly answer emails from some of you, but if any of you ever need advice, just say the word. And then I can hit you up for some. Like, would any of you want to come over and help organize my basement?
• I may have been separated at birth from someone else. Because, and Katy can vouch for this, approximately half of all the people I met at Blissdom thought they knew me from somewhere. That includes Nobu and Calvin, two guys from Harry Connick Jr's band who Katy and I bumped into after they'd performed. Calvin said, "You look familiar" and I cracked up. I did not tell anyone that I was recently featured on America's Most Wanted, let's just keep that between us. The guys were supercool, we talked with them for an hour and a half.

• Give back to your blog pals. OK, here's a mea culpa: Lately, I have been so sucked into blogging and work that I have not been very good at commenting on other blogs. After this conference, I promise to be much better about that. I will not, however, be able to come to all of your homes to organize your basements. Laurie from Tip Junkie did a great seminar called "Connecting With Your Community of Readers" and here's a recap. 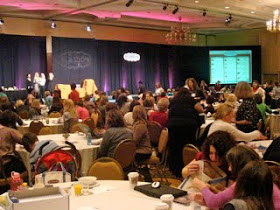 There were 500 people at this conference, and I was psyched to meet up with a bunch including the lovely Megan from Sweet Sadie Marie, Kim from Mom Tried It, Debbie from Vodkamom (it is hard not to like a woman with the name Vodkamom), Allie from No Time for Flashcards, Elizabeth from The Write Elizabeth, Sibi from Pearls & Grace, Rachel from Hounds In The Kitchen and Bridget from The Ivey League, who I first met at BlogHer. At one sessionI sat next to Jen from 4tunate, mama to quadruplets, and I have to admit I stared and wondered how she looked so amazingly good. I also met up with a few outstanding long-time bloggers: Deb from Deb On The Rocks; Megan from Velveteen Mind (whose sweet girl inspired severe baby lust); Catherine from Her Bad Mother, Michelle from Scribbit, Carmen from Mom To The Screaming Masses, Cecily from Uppercase Woman and Tanis from Attack of the Redneck Mommy. Also, shout out to Jessica Smith, a woman who talks as much as I do (and that is no mean feat). And the fabulous Lisa Leonard, who makes exquisite jewelry and has a seriously huge heart.

• Give back to the world, too. At one seminar, I met Louise B. from Mom Start. She pitches in with a site called Bloggers Give that's all about getting giveaways...for charity. Idea being, when you get giveaways from a company, ask for another one for charity. Such a simple idea that could have a lot of impact. I am going to start doing that, then donating the giveaways to local and national charities. I also met the Kristen from We Are THAT Family and Robin from Pensieve, who are part of an incredible group, CompassionBloggers.com. Compassion Bloggers are women who use their influence as bloggers to help children in the most poverty-stricken parts of the world. Kristen is headed to Kenya next month; Robin went to Calcutta last year. Amazing women, amazing effort.
• If you need help, just ask. The awesome Melanie Nelson from Blogging Basics 101 answered a bunch of questions for me and then yet another one when I saw her in a hallway. Jill from The Diaper Diaries called her husband to get advice for me on how to Twitter from BlackBerry, further enabling my web addiction. Corvida Raven of She Geeks told me about two good apps: Fotobook (a WordPress app that imports photos from Facebook) and Zemanta, which suggests photos and links for you as you blog. 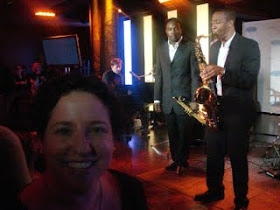 Kim from CraftyMamaof4 kindly snapped this picture (alas, trumpeter Shamar Allen was not pleased) and offered words of wisdom on having kid #3 (I swear, I have nothing to report).
• I may seem like a "firecracker" (Katy's description) but I am weak. Very weak. Me in the Blissdom sponsor area: I have a nice chat with Nicole at the Weight Watchers booth about doing their online program, then head over to the ConAgra area and down my body weight in their Alexia Onion Strips Crunch Snacks.

• Step away from your computer. I practically have mine chained to hand, because I blog and do freelance writing. But during the "Inspirational Writing" seminar I attended, Stephanie Precourt from Adventures in Babywearing urged us all to get out there and live life. Which I basically know yet sometimes neglect to do. Today I stayed in my pj's till about 2:00, when Sabrina came home from school and said, very reasonably, "Mommy, why are you still in your pajamas?" I had no good answer, so she gave me a time out.
• Want to grow your blog? Try the new product Blog MiracleGro! OK, kid-ding. Here's what to do, some of which you probably already knew: Comment on other people's bogs. Link to other bloggers. Network with bloggers who are way bigger than you, bloggers whose blogs are about your size, bloggers who are smaller than you. Offer to clean their basements. Have good photographs. Write well and write compellingly; the words "content is king" kept coming up. Also, see if you can get Harry Connick Jr. to guest post for you. Last, don't obsess about how big your blog is. In the words of Blissdom founder Alli Worthington, "The traffic to your site doesn't define the quality of your work or limit the possibilities to shine."

• If you're worried about privacy, quit blogging. Because everything is transparent on the web. From the get-go, I decided to use my kids' real names. I started this blog, in part, to raise awareness about kids with special needs, and I felt that using the kids' names had to be part of those reality checks. I've had fleeting concerns about exploiting them, but was reassured by something Catherine from Her Bad Mother said at the "Memoir Writing" seminar: "If you're coming from a place of loving your family and being fascinated by them, then you're good." That said, this also came up at the seminar: If you're at all worried that something you're going to put up will later embarrass your child or your family, don't put up that post. In all fairness, I haven't really told you much about myself. I am not really a fugitive of the law or a man or anything, but I am a longtime magazine editor who's worked at Glamour, Good Housekeeping, Redbook, YM (remember that?), Self. Lately, I've been freelancing for magazines and consulting/writing for sites including Parents Connect, MomLogic and babble. Also, I am wearing the same pajamas I woke up in and it is 1:26 a.m.

• It just doesn't pay to be a control freak. Despite the very specific list of instructions I left about the care and the feeding of the children, this is what happened. I called home on Saturday and Sabrina announced, "I watched TV all night with Daddy! And then I was grumpy in the morning!" Then on Saturday night Dave zapped me a picture of Sabrina and sure enough, she was wearing the same shirt she was wearing when I was left on Thursday. I guess not changing your clothes runs in our family. While I was away, Sabrina developed an addiction to some dumb-ass game called Cluck-It Chicken, Dave developed an addiction for ordering dumb-ass stuff off ebay and Max is still addicted to purple (surprise). But, Dave gets props because when I came home the house was in decent shape and the kids were totally happy. And I was one blissed out mom.
Ellen Seidman at 1:43 AM