Were you scared of going for kid no. 2 after having one with special needs? 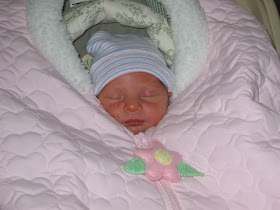 I've been e-mailing with a new reader to the blog, Janet, mom to an adorable 18-month-old boy who, like Max, had a stroke at birth. She asked the following, and said it would be OK if I answered her here so everyone could weigh in and share their experiences:

"Did you have anxiety about having another child? Or did you know it is what you wanted for your family? I think my son would be an awesome big brother. I did see a high risk pregnancy doc, they say what happened was a fluke and they don't feel my next pregnancy would be high risk. But the whole hospital experience etc. has me very scared."

I know how she feels—I had some anxiety about having a second kid. But my yearning to have another child overcame any concerns. I've always loved kids and definitely wanted at least two. I also wanted Max to have a sibling who would help him in life. And, less significantly but still important to me, I wanted to have a "normal" new-mom experience after what I'd been through with Max (that's Sabrina at five days old, above).

I didn't see a second pregnancy as much of a gamble. Max had a bilateral stroke, a relatively rare thing. It was caused by a lack of oxygen sometime during his birth—a human error, it was later determined. Max did have a contributing factor, two blood mutations that make him more prone to clotting. But those alone cannot cause a stroke, there has to be a trigger (in his case, the lack of oxygen). I went to a high-risk practice and felt secure in the doctors' hands. They put me on blood thinner, as a precaution. And I got lots and lots of ultrasounds.

Dave and I aren't superstitious types, but we decided to do things differently the second time around. So we found out the sex of the baby. The first ultrasound technician told me it was a boy—I'm still not sure what she saw on that screen. At the next ultrasound, I told the technician I was psyched to have another boy and after a few minutes she said, "Well, I'm pretty sure you're having a girl." When I called Dave from the appointment and said, "Guess what?" he answered, "IT'S TWINS!!!"

The only trauma I had during the pregnancy came in the form of the idiot neurologist who did a scan in my eighth month; we wanted to make absolutely sure Sabrina's brain was fine.

He obviously hadn't fully read my chart because as he glided the ultrasound wand over my belly, he said, "So, your first child had a stroke?"

"What did the autopsy reveal?" he asked.

I burst into tears. The nurse, who knew me, gently said, "Her baby did not die."

I couldn't stop sobbing for five minutes. It was absolutely, excruciatingly horrible. Idiot Doctor felt bad and jokingly said I could punch him, which I briefly considered. After he left, the nurse took 3-D photos of Sabrina to console me. 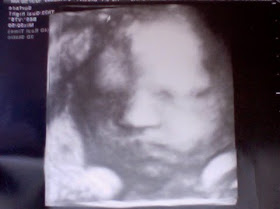 Definitely Sabrina, with a very smooshed nose. Actually, she looked like she was itching to tell that doctor off.

So, Janet, what I say to you is go for another child (and no worries about Idiot Doctor, he's not in your area). It was very special to experience new momhood with Sabrina, I savored every moment. Having a sister has helped Max thrive (even when Sabrina's torturing him, she's at least teaching him to stick up for himself and inspiring him to open up his tight right hand to pull her hair). Having one typically-developing child and one with disabilities has made me a more balanced mom—I might still be one big ball of worry if I only had Max to focus on. Each of them made me appreciate the other that much more.

How about you—do you have concerns about having a second child? Or were you worried before you forged ahead?
Ellen Seidman at 12:01 AM