Max's progress: What I see, what I don't 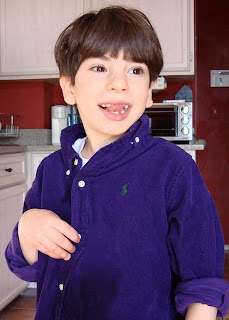 So, Max had his seven-year checkup. He's 36 pounds (I stand corrected, he was 33 pounds last year at this time, not 34). That is pretty skinny, but the doctor felt three pounds is a respectable gain and wasn't concerned. We'll keep serving Max fattening foods and try not to pork-ify Sabrina who takes after her mom and seems to put on weight simply by staring at food.

Max actually had a fine time at the pediatrician's office because, oddly enough, he likes that ear probe thingie (it's called an "otoscope," I just looked it up). While we were waiting for the doctor to come in, I pretended to examine Max's ears and then he examined mine. Love means letting your child poke around your ear with an ear probe.

Dr. G has been caring for Max since he was a baby. I actually interviewed him the month before Max was due. Back then, my biggest concern was whether or not I would click with a pediatrician's philosophy on childcare. I get stabs of sadness when I think about those months before Max came into this world and how determined I was to make everything perfect for his arrival: the perfect baby clothes, the perfect nursery, the perfect crib toys. Then we found out that Max had suffered a stroke and brain damage. And suddenly, perfect no longer mattered. We only wanted to know if Max would be able to walk at all, if he'd be able to talk at all, if he'd even be a little OK.

Dr. G, who hadn't seen Max in a year, commented on how far he's come. "He's so much more communicative!" he said. Max had noticed that one of the little stuffed animals the doctor had on a string around his neck was purple (the obsession lives on!) and Max charmed him by gesturing toward it and saying "Ur-ul! Ur-ul!" The doctor's parting words: "The thing about Max is, he never plateaus."

The rush of happiness you get when doctors say things like that can keep you on a high for weeks. But it didn't stop there: After that appointment, I dropped Max off at school and bumped into a mom whose kid was in Max's class two years ago. "Wow, Max looks amazing," she said. She couldn't believe how well he was walking and that he was saying a few words.

OK, this is irony. I DO A BLOG in which I chronicle Max's daily life. Hel-lo. And yet, I fail to absorb how much overall progress he has made until someone else points it out. I guess it's hard to notice the major distance your child has traveled down the road when you are so busy tracking the little footsteps he takes.

At times like these, though, I realize that my Max has come a long, long way.
Ellen Seidman at 12:35 AM