"I had a scary dream last night," says Sabrina 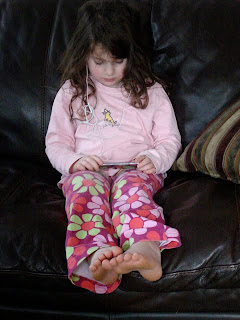 "What was the dream about?" I ask.

"Me and Max were running, running down a street and Max fell and he started crying and he couldn't get up."

"And then what happened?" I ask.

"You came and picked him up."

Lately, Sabrina has really been wrapping her mind around Max and his needs. She's almost five—an age when, her preschool teacher recently mentioned to me, kids quit being so egocentric and start thinking more about other people. (She is still, however, wearing the same Tinkerbell shirt every single day that says, in gigantic letters, "It's All About Me.") She's been doing more big-girl things, like asking Dave to download songs to our iPod such as "Tonight's Gonna Be A Good Night" (there she is above, playing some sort of game—she's far more adept with Dave's iPhone than I am). The last vestiges of baby-ness are disappearing, though her dimpled knuckles and protruding belly remain. She also can't quite pronounce her th's, so she says "My froat hurts" instead of throat, for example, which makes me smile inside every time.

Despite Sabrina's increasing awareness, she's still mean to Max at times. Her latest tease is, "Max, purple is MY favorite color," knowing full well he's all about purple. Or she'll try to get me to go down to the basement to play with her alone by saying, "Max says he doesn't want to come" when Max has said nothing of the kind because, er, Max can't yet verbalize things like that. She's also tried to convince me that Max has said it's OK if, say, she gets the bigger slice of pizza—even as he's sitting there! She's never yet tried, "Max says he wants the Polly Pockets Cruise Ship Playset," though I wouldn't put it past her.

But she's really beginning to understand Max is special. I'm wondering what sort of questions she'll ask, and what sort of answers I'll come up with. So far, I've kept things simple; once, she asked why Max doesn't talk and I said, "He does talk, he just talks in his own way" and she seemed satisfied with that. I haven't yet had to say, "His brain got hurt when he was born." I get a little teary-eyed just typing those words; hopefully, when the time comes, I'll be able to say them matter-of-factly. I don't want her to sense whatever residual sadness I have about what happened to Max. I just want her to see him as her brother, a kid who may need her patience and her help...but not her translation services.
Ellen Seidman at 12:17 AM