How to not spoil your kids: I'm trying, I'm trying 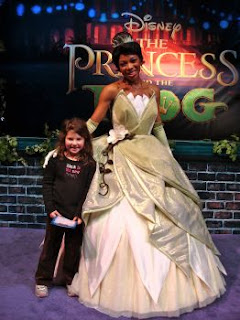 Those are Sabrina soundbites from our foray on Sunday to see The Princess and The Frog. Dave got us tickets for a special preview of the movie. It was followed by The Ultimate Disney Experience, where you got to go and meet all nine princesses, do crafts, see some Disney archive stuff, learn how to make animated movies, and mingle with hundreds of other little girls with princesses on the brain.

Sabrina and I both enjoyed the movie. And she was excited to see all of the princesses afterward, especially the new princess, Tiana. About time Disney made an African-American princess.

So, it was a nice day, except Sabrina kept waaaaaaanting stuff. Which made me worry that we're spoiling her, especially Dave. Forget her little finger—she has her Daddy wrapped around her entire body. He has been known to walk in the door on weekends carrying some new toy for Sabrina, and when I ask him why he'll say, "Because she told me she's been wanting one and I promised it to her!" Uh-huh.

I'd already told Sabrina in advance we weren't getting her a doll, but that didn't stop her from waaaaaaanting one. Or all the other merchandise. Inevitably, I started thinking about Max. We spoil him to some extent. When a therapist recommends a toy that could help him—say, a remote-control truck that will help him learn to press a button— we typically run (not walk) to the store to get it. But since Max can't fully express himself verbally, there's no "I waaaaaaant"-ing from him. Occasionally, if we're watching TV and a commercial for a toy truck comes on, Max will point to it. I'll say, "You want Mommy to get you that?" and he'll nod and say "YES!" For the holidays, I'm planning to sit him down at the computer and show him a few things I think he'd like and let him vote yay or nay. Sabrina's been telling me what she wants since the summer.

But the truth is at this point, both my kids have more toys than they need. And I don't want them to think the holidays are just about gifts. So we're going to take some unopened toys we have and give them to a realty agency down the block that's doing a toy drive; I've been talking with the kids about giving toys to kids who don't have money to buy them. I'm also going to find a local soup kitchen or shelter we can go help at around Christmas, or at least deliver food to. And I am limiting what we get them for the holidays, which also fall around their birthdays—Max's is in mid-December, Sabrina's is in late January. My basic challenge: keeping Dave under control.

How do you handle the whole don't-spoil-the-kids thing? 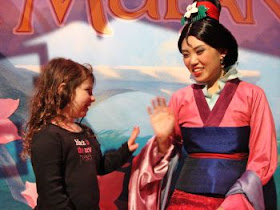