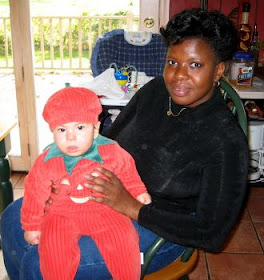 So, Max's teeth keep falling out but I haven't been able to save a single one; we think he's been swallowing them. Leave it to our nanny, Linnette, to actually snag a tooth when it came out today.

"Nanny" always sounds so pretentious to me but Linnette is so much more than a babysitter. Actually, "Max's patron saint" would be a much better description. That's her above, with Pumpkin Max at nine months old.

I hired Linnette even before Max was born; she sort of fell into my lap, referred by a friend of a friend. I thought she was kind, competent, sensible, good-hearted, and a little bit proper, which I adored about her. Then Max was born and we spent two weeks in the NICU. I called and told Linnette there had been some problems at the birth, but I was scared of telling her the truth. Hell, I didn't even know what the truth was. My newborn had a bilateral stroke at birth and resulting brain damage—that much was true. He was going to have challenges, but I didn't know how severe they'd be. Nobody did. Would Linnette want to quit? Just the opposite: Linnette was in. She said she'd do whatever she could to help Max along. I think she fell in love at first sight, which wasn't too hard. Max was a heartbreaker from the get-go.

After I returned to work from maternity leave, Linnette sat through Max's therapies. She exercised his stiff arms and legs, helped him hold toys when he had trouble grasping them, spoke to him and did everything she could to stimulate his brain. Over the years, I've found that she's been able to handle certain things in a more level-headed way than I can. Feeding Max, for instance. It's still an emotional issue for me, even more so when Max was very young. It took such a long time to feed him, since he didn't have good tongue coordination and kept on pushing out food with his mouth. I was always so concerned he wasn't getting enough to eat. And I was unnerved. Eating seemed like the most fundamental, basic thing in the world for a kid to do. It was upsetting that Max couldn't do it well, although now I understand just how cerebral palsy affects a child's ability to use his tongue muscles. Max's issues with eating were an undeniable reality: I had a child with disabilities.

I'd heard about a "Care Hero" contest on Care.com where you can nominate caregivers who've gone above and beyond to care for people they love or work for. So, I nominated Linnette. I'm hoping she'll be a semi-finalist. In my dreams, she'll win the grand prize, which includes a hotel stay, tickets to a show and dinner. If you have someone in mind to nominate, here's the Facebook page. Also, this weekend, Care.com is giving free access to the site, where you can check out profiles of approved local caregivers.

Who's the babysitter in your life who you trust most?
Ellen Seidman at 11:48 PM