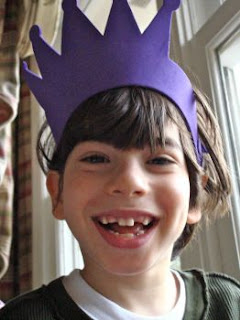 Things often don't turn out the way you expect, as many of us know—but that doesn't mean they don't turn out good. That pretty much sums up our Halloween.

I'd gotten Max a crown at Michael's to go with the car costume I made him. He loved the thing so much he slept in it. 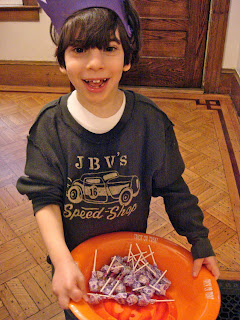 Max couldn't wait for all the kids to show up at our door. On Friday, he separated the purple lollipops from the others and put them in a bowl. Only when kids showed up, he'd yank away the bowl because he didn't actually want to give away any of the purple lollipops (he was into the "trick" part of Halloween). So he gave them other treats. Today he was still walking around the house with that bowl of lollipops, which he keeps in his room. 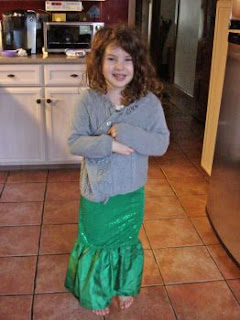 We attempted to go to our town's Halloween parade (it's more like a thousand kids and parents zooming around from store to store grubbing candy). Sabrina dressed up as Ariel. We had a stand-off over her flip-flops, which she still insists on wearing. "One more week!" she begs, every week. I gave in. Then we got to town, someone said "Ooooh, look at that cute Ariel!" and Sabrina burst into tears. She was inexplicably weepy/grumpy for the rest of the afternoon. Max wasn't having any of it, either—he didn't want to put on his costume. He just wanted to hang out in the parking lot. We didn't stay very long. 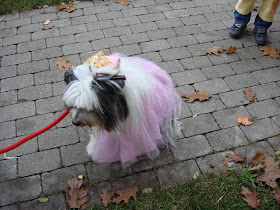 Princess Puppy was in a better mood than Sabrina was. 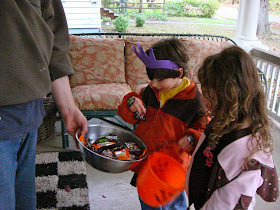 Halloween day itself was fine. "It's better today," as Sabrina said. The kids decided they didn't want to wear costumes, though Max wanted his crown. And Sabrina, of course, wanted to wear her flip-flops. So we told everyone Max was Max from Where The Wild Things Are and that Sabrina was a stubborn four-year-old. 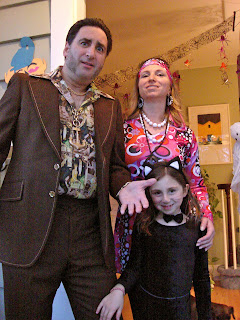 Our very fun neighbors: Greg was a seventies guy, Gyneen a seventies girl and Jessica was a cute cat. Greg kept spraying Bianca into his mouth and saying, "How yoooou doin'?" He actually grew those sideburns. 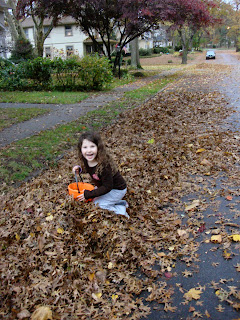 Sabrina needed to roll around in the leaves for a while. 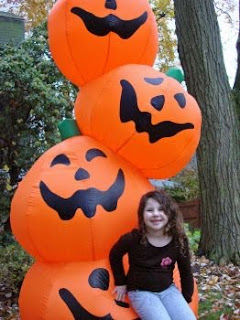 She cozied up to this display. At one house, a guy had all his treats in a purple bucket. Well, Max fell in love. He kept pointing to the bucket, then to himself. "He's in a purple period—you know, like Picasso's blue period," I explained to the guy. "You want to trade buckets?" he asked. 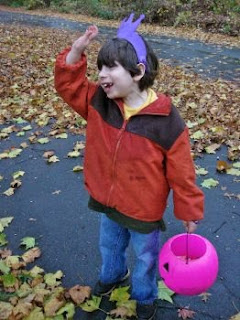 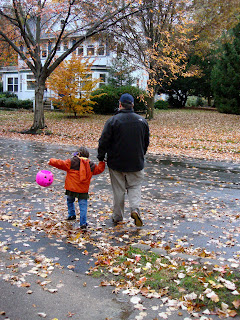 So, that was our Halloween.

Time spent transforming a purple Bed, Bath & Beyond shopping bag into a purple car: One and a half hours
Amount of time Max actually wore said purple costume: 9 or so minutes
Time spent arguing with Sabrina over the flip-flops: 6 minutes
Time spent explaining to Sabrina why she couldn't eat candy for breakfast: 4 minutes
....or ice-pops: 2 minutes
Calories spent on candy (me): One katrillion.
Fun with kids: Priceless.

What do you guys do with all the leftover candy? I'm going to call a local homeless shelter to see if they'll take it.
Ellen Seidman at 11:15 PM