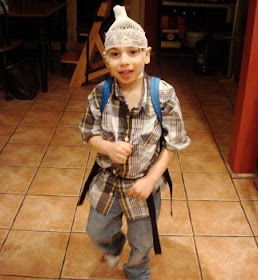 What a nutty day. Our babysitter stayed home sick, so I scrambled to drive Sabrina to preschool and head into work and Dave took Max to get hooked up for the ambulatory EEG (they're checking for absence seizures). Max screamed bloody murder the entire time they glued the wires to his head. I don't blame him. And that cap! Can you say fashion faux pas? Good thing Max isn't dating yet. And too bad I read Cindi's suggestion yesterday to have him wear underwear over his head only after Max was en route, that would have been ever so much more fab. Next time! Tonight he fell asleep (in my bed, where else?) comfortably enough on his side, the backpack holding the monitor propping him up.

I decided to broach the topic with Sabrina.

Me: Why do you think Max is wearing that special hat?
Sabrina: "Because he's sick."
What's wrong with him?
Sabrina: "He, uh, he, uh, I don't know. Just talk about me now."
What would you like to talk about?
Sabrina: "I'm going to talk about, I'm sick and I have a runny nose. And I'm sneezing a lot."
Do you need to go to the doctor?
Sabrina: "And my nose is stuffy all the time."
Do you need to go to the doctor?
Sabrina: "No. It's almost better."
Do you want to talk more about Max?
Sabrina: "Max likes trucks and he likes to play with them and likes to line up them. I don't like Max when he hits me, only when he plays with me. Now you'll talk about something?"
OK! Let's about Max. Max needed to get a special test to make sure his brain is OK.
Sabrina: "I'm going to spell something on the computer."

And that was that. The EEG stays on till Friday morning, then we have our appointment with the neurologist the following Friday.

Tests like this mildly unnerve me because I don't want to hear crappy news about Max's brain. When Max was a baby, our neurologist told us to look at what he was doing and not get disheartened by the brain damage in the MRI photos taken the week he was born. MRI film may look grim but it doesn't tell what a child's capabilities are—and how he can overcome the damage. Dave and I have stuck with that advice since. Dave actually found an amazing story yesterday on CNN about a woman named Michelle Mack in Falls Church, Virginia, who was born with half a brain. She has some challenges but basically talks normally, graduated high school and lives a full life. Get this: The right side of her brain rewired itself to take over functions controlled by the left, damaged side. Wow. Just, wow.

And so, the scary MRI film sits way in the back of a closet, a monster in the closet that we never let out. Of course, if Max is having any sort of seizures, we do need to know. They'll be controllable by switching medication, if worst comes to worst; the one he's on now doesn't help with absence seizures.

Now, more rock-the-vote requests: Mutual of Omaha did a tour this summer and recorded people's "aha" moments. They got 1000 stories, narrowed them down to 75 and they're picking a Top 10 based on votes. Included in those videos is Barry, who talks movingly about having a son with Down Syndrome. Voting's open till tonight to 12 a.m. Pacific Time, so jump in!
Ellen Seidman at 12:39 AM