Outrage of the month 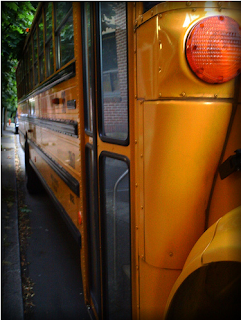 Dealing with The System is never fun, but (shocker!) it's even more maddening when you have a kid with special needs. I just heard about a five-year-old with ADHD in Queens, New York, whose bus ride to school was taking two hours to and from—even though he only lives 10 minutes away. Special ed advocates have reportedly been hearing a lot of similar horror stories this year. We haven't had it so bad, although our bus has a lot more kids on it and it's never on time.

Granted, the school says their buses for kids with special ed have been cut down from three to one. We'll all be dealing with the realities of our new economy in some way or the other. But surely, there is a way to arrange things so that a child who's already got mental challenges is not forced to be captive on a bus for four hours a day. And there was; the mom complained to the Department of Education, and they figured out a better route for him.

In these times, it's no longer OK to be mere champions for our kids—we need to be superheroes. We are not just the squeaky wheel that gets oiled—we are the VERY LOUD wheel. We are not just pushy—we are steamrollers.

Photo by Nikki.Jane
Ellen Seidman at 6:57 AM