I'm having one of those roller coaster days 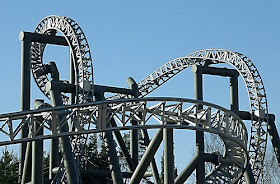 As I type this, my sister is in the hospital, in labor with her first baby. I am very excited, and also very anxious. I think she and her husband know I'm a little cuckoo with concern because he's been calling every few hours with updates. Like he needs to be worrying about me!

After what I went through with Max's birth, I know how horribly wrong things can go. I can't help but freak out a little. Meanwhile my mother told me that my dad, who has Parkinson's, has been muttering about how something's wrong with Judy. We think he may be confusing what happened to Max and her pregnancy, but it's still unnerving.

The other half of my anxiety: last Friday a nurse from Max's school called me at work to report a teacher had seen him staring into space for about ten seconds. The concern is absence seizures,, also known as petit mals. The teacher called his name but did not touch him, which would have been good to try to see if she could snap him out of it (if you can break the trance, it's not an absence seizure). The neurologist didn't think it was a seizure, but said to keep an eye on him, which is what I asked everyone at school to do.
Max staring into space is not a new thing; he does it, and I can always say his name and he'll snap out of it. His brain needs time to organize itself. He can also zone out when he's in noisy settings.

Yesterday, the nurse called to say she'd been observing him and he'd stared off into space for four seconds. She could not snap him out of it. I told her I wanted her to speak directly with the neurologist; often, he has a bunch of questions about what was noticed, and I thought the two of them should talk. They did today.

The neurologist and I spoke tonight and decided, once and for all, we needed to do an ambulatory EEG (they attach a monitor to Max, we go home and click a button anytime we notice any unusual behavior, go back to the hospital the next day and may have to do another day if nothing shows up). Absence seizures, he explained, most often crop up in kids between ages 4 and 8; it's related to the development stage their brains are going through then. Reassuringly, he said this type of seizure could NOT cause more brain damage. The biggest problem is that kids who suffer this lose clips of time here and there from tuning out. It's disorienting. It can interfere with learning. But, absence seizures could be quickly treatable by putting Max on a new medication (he currently gets one and a half teaspoons of Trileptal twice a day).

Words alone could not express the relief I felt when the doctor said there was no risk of brain damage. Still, the fear of seizures has me in its grips. If I had to play armchair shrink, I'd say the reason is this: I can usually act like everything's going well with Max because he basically looks OK and while he has his challenges, I can pretend they're not so bad.

With seizures, there is no denying that I have a child with brain damage.

The roller coaster of emotions you can experience in a mere day when you have a kid with special needs is just unbelievable.
Ellen Seidman at 9:09 PM