Celebs who have kids with special needs 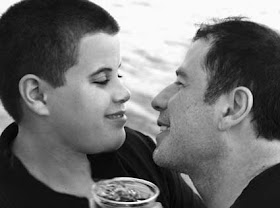 I'm just catching up on this week's events, and read an article detailing what John Travolta revealed during this week's trial against the two so-called human beings accused of trying to extort $25 million dollars from him (doesn't that make your blood BOIL?!).

This part got to me:

"The actor testified that his son Jett, 16, was autistic and suffered seizures every five to 10 days. He said the seizures would last 45 seconds to a minute and Jett typically slept for 12 hours after each one. "He was autistic. He suffered from a seizure disorder," Travolta told the jury when asked about his son's condition."

I know how hard it must have been for Travolta to have to reveal that his son had autism; he reportedly hasn't done so until now. While part of me wishes he had—celebrities can do so much for raising awareness about a disability—I also respect his decision not to have told the world about that.

Colin Farrell has talked about his son, James, having Angelman Syndrome. Neil Young has gone public about his son, Zeke, and his cerebral palsy. And Nashville songwriter Craig Bickhardt, who's written for Ray Charles and Johnny Cash, has a little boy, Jake, with CP. He penned a song for him called "Giant Steps," and it's beautiful. Here's a snippet:

Have a gorgeous weekend with your little ones.