Were you traumatized by the NICU? 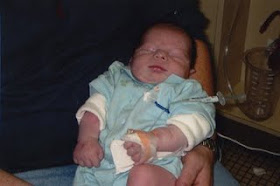 That's the subject of a New York Times article I just found out about, a piece that talks about the effects of having a child in the NICU. According to a new Stanford University study, parents of preemies in prolonged intensive care are themselves at risk of developing post traumatic stress disorder—a mental illness typically associated with soldiers returning home from war.

Max was in the NICU for two weeks (that's him toward the end of his stay, above); having an infant in the NICU for months on end seems like a whole other ring of hell. My heart goes out to any of you who went through that. I can still picture my little Max lying in the incubator, hooked up to a million tubes. He looked so pink and so perfect, it was hard to reconcile that with the fact that he had extensive brain damage.

I'm past the trauma of the NICU...mostly. It'll always be there, tucked away in my psyche, but the reality of Max has helped heal me.
Ellen Seidman at 12:28 AM