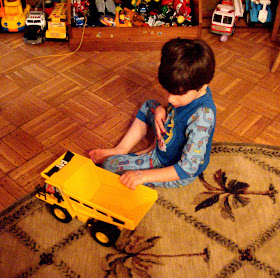 Max has a way of getting fixated on things.

Last weekend, he went to Aunt Judy's new apartment. Ever since, he's been saying "Aunt Judy's house!" all the time.

Part of me thinks this is adorable.

Part of me is incredibly grateful Max is talking at all, that he can express his wants with words and that he's persistent about it.

And then there's a part of me that's concerned about this tendency. What does it mean that he repeats things or gets stuck on doing one kind of play? Is this a sign of another cognitive issue? It's on my list of things to ask the neurologist (I always have the longest list of questions, from the important to the downright ridiculous, by the time we go to see him.)

I struggle with this impulse to think that Max's quirks could be a sign of a problem. I'm guessing it's not uncommon to feel this way when you have a child who already has significant development issues—you can't help but think you're spotting yet another one.

Rationally, though, I know that Max deserves the benefit of the doubt. He certainly doesn't need a Mom who's always looking at him through gray-colored glasses; he needs me to cheer him, guide him as necessary and just let him be a kid. Come to think of it, I guess it's me who has a fixation, and I need to let go.

Another day, another sanity check.
Ellen Seidman at 12:05 AM