Sibling rivalry: yeah, we've got it 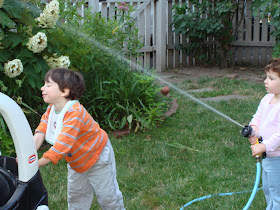 Sabrina has this nasty habit of grabbing stuff right out of Max's hands. You know, just because. As he was holding a little broom last night (I am training the kids to clean the house, and next I plan to teach them roof repair), she swiped it from him. She did laps holding it, with him chasing her and finally grabbing her hair. She screamed, he screamed. Good times!

Sibling rivalry is nothing new to me: My sister and I used to go at each other. We're just 17 months apart, but we have pretty different personalities that basically boil down to, she's easygoing, I'm usually on overdrive. Come to think of it, sort of like Max and Sabrina. When we were little, we fought vehemently about stuff like who got the bigger half of anything. As teens who shared a room, we'd battle over when to turn out the lights (she'd want to crash, I'd want to stay up and read books). We're close these days, but we weren't BFF's back then.

Now I know exactly how my mother felt when my sister and I went at each other. When Max pulls Sabrina hair, because his hands get so tight from the cerebral palsy it's hard prying his fingers off, and I hurt for her. Sabrina sometimes will push Max and he'll go flying (she's got 10 pounds on him), which is always upsetting to see.

In some perverse way, though, it's a relief to me that my kids have sibling rivalry. It means that Max is cognitive enough to feel competitive with Sabrina, and to fight back when she bugs him. I know it's a normal part of childhood. And it's oddly reassuring to have "normal" in our lives.
Ellen Seidman at 12:17 AM