How open are you about your child's disabilities? 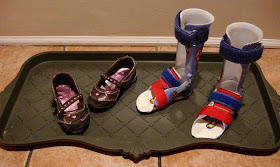 I got a call a few weeks ago from a woman in my area. She'd read an article the local paper had done about Max and his stroke. She had a child with special needs of her own, and wanted to discuss our school district; we finally spoke the other night. Soon I'd told her all about Max's challenges and needs and I learned about her daughter's. By the time we hung up, I had a new friend.

When people ask what's up with Max, and they do, I am pretty open about his stroke and what happened to him because of it. I've always been that way, although early on in his life I had concerns about his privacy. Was it fair to Max to disclose details about his disabilities? What if as a grownup posts from his past—posts me, his own mom, had written—were there to damn him from being considered a "normal" adult?

Ultimately, I decided the positives outweighed the negatives. First, I do not want Max to feel as if his disabilities are something to be hidden, but something that are a part of who he is—every wonderful, spectacular, scrumptious, miraculous inch of him. In talking about Max's challenges, I also get to compare notes with other moms and learn things that could do Max good. And I can help moms with typically-developing kids understand that children with special needs should be treated just like any other kid. The one exception to all of the above is work, where I don't tell people a whole lot about Max. I'd never want a colleague to view me through a sympathy-tinted lens.

Dave is similarly straightforward about Max, except he doesn't get into discussions with friends, neighbors or whoever about him in the way I do. It's not that he doesn't want to, it's that people are less likely to ask him the questions that they pose to me. And he is generally less likely to discuss child rearing. If he ever turned to a mom and said something like, "I'm curious, what time do you put your kids to bed?" or "Do you think it's OK to let your little girl go the mall in her pajamas?" I'd be all, "WHO ARE YOU AND WHAT HAVE YOU DONE WITH MY HUSBAND?!"

So, how open are you about your child's disabilities?
Ellen Seidman at 12:45 AM