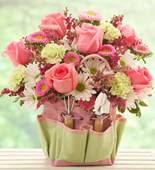 Usually, the only thing I have to give away on this blog is advice, blah-blah and gratuitous photos of my kids. (Once, I did offer up my mother-in-law, but oddly enough I didn't get any takers). Recently, though, a nice lady from 1-800-Flowers e-mailed me and offered to do a bouquet giveaway. Because we're all that fabulous. 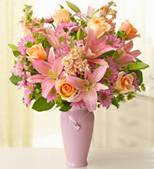 OK, so the company does have some new stuff it would like you to know about. It just launched The Spot A Mom movement, to celebrate the many varieties of moms out there. They also have a fun guide for figuring out which kind of flowers suit different moms' personalities. 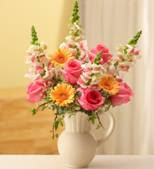 To enter to win, just leave a comment and be sure to mention which one of these four arrangements you covet (Aussies and Brits, jump in, they can send flowers pretty much anywhere). I'll randomly pick a winner, courtesy of random.org, on Sunday at midnight and announce the winner on Monday. You'll get the bouquet on or before Mother's Day. And, if you'd like, I can ask if they'll sign the card "xoxoxo, Lorenzo" or something if you'd like to make the hubs a little jealous. 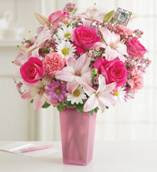 Sentimental Surprise
Ellen Seidman at 12:03 AM