What happened to Max: Finally, we take him home 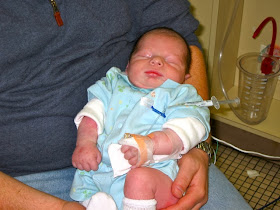 The day after we found out that Max had a stroke, I was released from the hospital. We decided we'd stay in accommodations there, and drove home to pick up clothes and stuff. When we walked onto the front porch, there were several bouquets of flowers, random packages and a pan of lasagna a neighbor had made. It all looked so sad sitting there.

The house was also sad, too silent and too empty. Dave and I couldn't bear to go into Max's freshly-done room, so we steered clear. I spent a couple of hours on the Web, researching infant stroke and therapies. I discovered an online group, The Pediatric Stroke Network, and joined. That felt good. I had prepared an email with filled-in addresses to send when Max was born. That stumped me: What to say? In the end, I wrote that we'd had a beautiful baby boy who'd experienced some trouble at birth, that the doctors weren't sure what lay ahead for him but we felt blessed to have him.

Friends, family and coworkers sent cards. Some had simple messages such as "Congratulations on your new baby boy!", as if his birth had been like any other. I knew those people were just trying to make me feel better, and I appreciated that. Some people wrote long cards rich with sympathy and encouraging words, and I appreciated those, too:

"I know that everything is really insane right now, but I just want you to know that I'm thinking about you every day and praying for you."

"We are all sending our good thoughts, prayers and fervent wishes for Max's quick recovery. You are very loved at this office, Ellen, and everyone here is beaming hugs and kisses at you, David, and your tiny wonder boy."

"You are incredibly strong, and you will find the extra strength to deal with whatever comes. If you want me to hop on a plane and come be there with you, just tell me."

Over the next week, Dave and I were in and out of the NICU, but mostly there. I passed the time by reading to Max. My favorite book was a Dr. Seuss one my good friend Wendy had brought me, Oh The Places You'll Go. Dave and I talked with a few of the parents there. The baby next to Max, a preemie, was just a little larger than Dave's hand. His skin was so transparent you could literally see his heart beating. His parents had been taught how to tap on his heart to make it restart when it stopped. They told us that he, too, was at risk for all sorts of delays and problems. Over the years, I've wondered what happened to him.

I don't remember on what day or when Max was finally conscious, but suddenly he was, his eyes foggy. No newborn can see that clearly, let alone one who'd been through brain trauma. In order for me to hold him, the nurse had to gingerly lift him out of the incubator so as not to get the wires tangled up, and rest him in my arms. Holding him gave me relief that nothing else had.

I watched Max constantly to make sure nothing seemed off. Occasionally, he'd thrust out his tongue. "Is that normal?" I asked an NICU nurse I'd come to know. "No," she said. "He's also been arching his back. Is that normal?" I continued. But I already knew the answer: No. By then, I'd read up on cerebral palsy; those were signs of it. Then came the day when the sweet young pediatric neurologist showed us the MRI scans of Max's brain, and where the stroke had struck. There it was, in black and white: our baby's brain damage.

Slowly but surely, we found out Max was at risk for more problems. A seizure disorder, for one, although within several days of his birth they'd been contained by the medication. Some babies who have strokes at birth are unable to swallow. Max wasn't one of them, and he was able to down all the bottled breast milk I'd stored. The nurses kept a close eye on his body temperature—damaged brains can have trouble monitoring body temperature. Again, Max held his own. When the nurses came to test for hearing and Dave and I learned Max was fine, we were euphoric.

I asked the social worker who'd been helping us to have the occupational and pediatric therapists visit Max, and they did. I bitched to her that the big-deal founding father of pediatric neurology never had one optimistic thing to say; the next time he saw us, he talked about brain plasticity. Meanwhile, I'd put in a call to Early Intervention (a state program for children under three with developmental disabilities) and told them about Max's situation. Within a month, Max was getting weekly occupational and physical therapy.

Finally, finally, finally, Max was released from the hospital. He'd been there for almost two weeks, but it had felt like two years. My entire life had changed. As I stood in a waiting room, a woman came over to me. "You look so much better now," she said, kindly. Her own baby had some lung troubles, and she'd noticed me on the NICU floor. I can't even imagine how awful I looked. It had barely registered that I'd had a C-section.

We bundled Max into his car seat, and I waited with him in the cavernous lobby of the hospital as Dave got the car. I'm sure many first-time parents can't quite believe it when they leave the hospital with their baby—you're letting me? Take this tiny little creature? Without any experience? For me, that feeling was magnified a million times. I was bringing home a baby who'd been very sick, who was at risk for seizures, and who had unknown delays and challenges lying ahead of him.

But that day when I walked out of the hospital with Max into the sunlight, I had hope. I had a beautiful boy, and I was his mom. And I was going to do everything within my powers to make the world right for him. 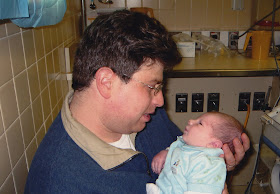