A scene from Sabrina's wild and crazy fourth birthday party

Max has been incredibly chatty lately. He lets out strings of sounds that seem like sentences (in Swahili or something). The rhythm and variation in tonality are a definite part of language development, and so I'm ecstatic. He was very excited to be at the party, which also thrilled me; he used to wig out in any new situation.

When Max is doing really well, I find myself thinking back to how little faith I had early on in his life that he would be OK. Max has microcephaly, which basically means the circumference of his head is small and so is his brain. The risk of the condition is that it can affect brain function. Early on in life, a couple of doctors made much of the fact that Max was microcephalic, which caused me great concern. I'd get anxious whenever we'd go to a doctor and he'd take out a tape measure. Once, I asked Doc Cargan, our wonderful pediatric neurologist, whether Max's head would look like the shrunken-head character at the end of Beetlejuice. That gave him a good laugh, though I was only half-joking. 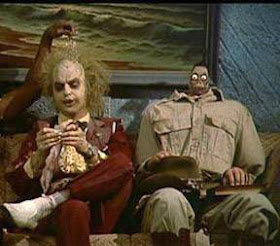 Eventually, I learned that you can have a family history of microcephaly. As it turns out, my father also has a really small head, and the man is brilliant. Not for nothing, Albert Einstein's brain was also smaller than average.

I'm not deluding myself here. Max's brain doesn't work perfectly. But it works pretty darn fine, especially considering that he had a major stroke at birth. And his head looks perfectly OK—the good hair probably helps! The most important thing is that he continues to progress. That's a hard lesson I've learned: forgetting Max's medical history, not letting my mind go to crazy places and staying focused on what he's doing. 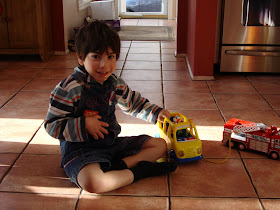 And this child continues to amaze me.

Around 12:00 EST today, a first post of mine goes up on 5 Minutes For Special Needs‚ check it out when you can.
Ellen Seidman at 12:23 AM