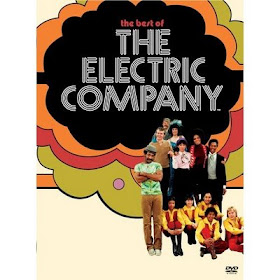 First off, I really appreciated the feedback on the post about the labels we put on our kids. Mel and Billie are so right about mentioning the person first and saying "I have a kid with special needs" instead of "a special needs kid." I will remember that. The article Dianne linked to in her comment was dead-on, everyone should check it out.

I bumped into a neighbor of mine who works over at PBS and she told me some happy news: They're doing a new version of The Electric Company, starting in January. I took a look at the sneak preview, it doesn't seem anything like the old version (which ran from 1971 to 1977) but it does seem creative. Do any of you remember this program? I learned a lot about spelling from it, especially from those two talking silhouettes (check out this YouTube snippet). Come to think of it, I would love to introduce my kids to Mr. Rogers. It's a beautiful day in the neighborhood!

Generally, I let my kids watch Sesame Street, Blue's Clues, Mickey Mouse Clubhouse and Jack's Big Music Show (which gets amazing musical guests) on TV. Max is also happy to sit around watching NASCAR and any show involving cars or trucks. He enjoys cooking shows, too, which may be wishful thinking given my lack of cooking. Which programs do you let your kids watch? And which ones would you never, ever, not in a million years let them watch? Spongebob Squarepants, I'm talking to you.
Ellen Seidman at 12:15 AM